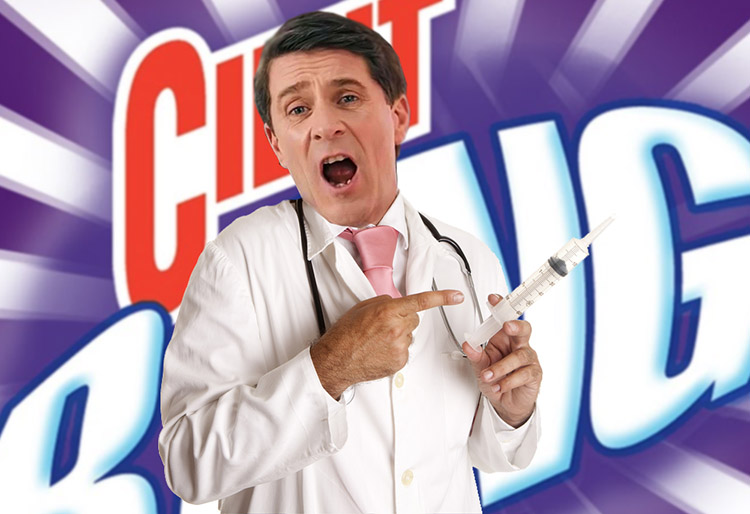 CILLIT bang representative Barry Scott has confirmed the company has almost completed developing a Coronavirus vaccine which he claims will eradicate 99.9999999999% of Covid variants, stating “bang and the virus is gone!”

Demonstrating the new vaccine at a high-octane press briefing today, the overly enthusiastic Mr. Scott looked almost manic in appearance as he frantically injected an elderly test subject with a heavily branded vile.

“Hi, I’m Barry Scott and I’m here to introduce new Cillit Bang Universal Variant Strain & Drain™,” he shouted loudly, forcing the female patient to recoil from his the force of the decibels and cover her ears, “look, the toughest variant strains are no match to Cillit Bang’s supreme power! Bye bye, Covid!”

Asked whether this new vaccine was authorised by the European Medicines Agency, Scott just continued on with various sales lines, his eyes now growing wider and wider with enthusiasm.

Meanwhile, Minister for Health Stephen Donnelly said that the new Cillit Bang announcement is ‘progress’, before promising to have the entire country vaccinated with Cillit Bang Universal Variant Strain & Drain™ by next week.

“We’ve been told that one bottle will be enough to vaccinate the whole country, so that’s all we need to hear before promising anything” Donnelly concluded.