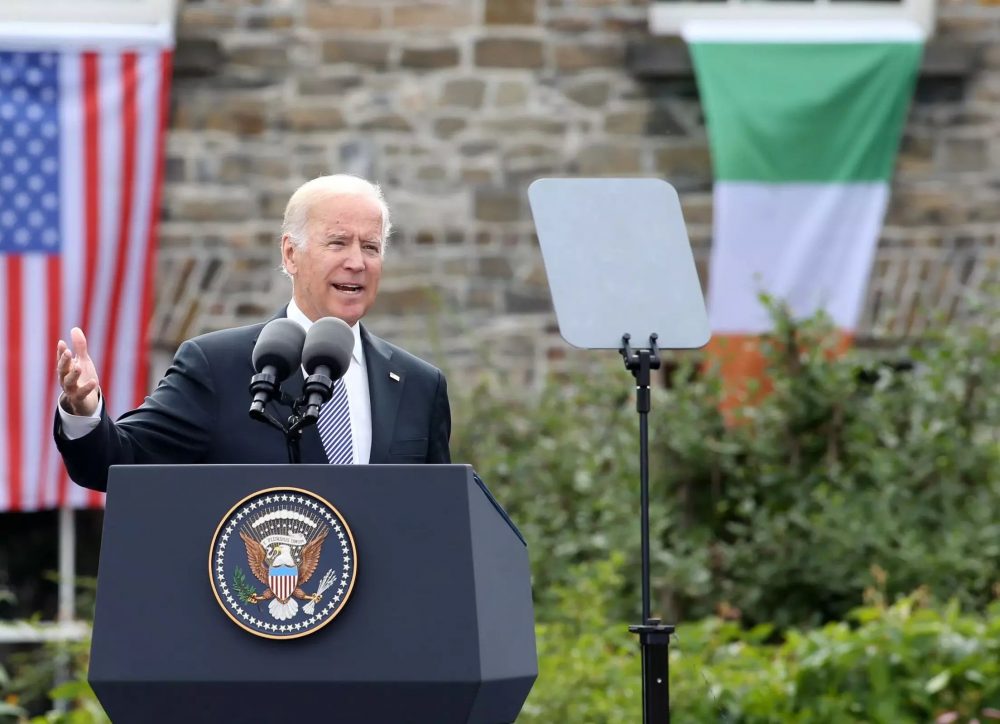 AFTER his chat with Taoiseach Micheál Martin concluded yesterday afternoon, WWN was able to bag the exclusive interview every Irish news outlet was hoping to get with US president elect Joe Biden.

Here in Ireland Biden’s election is of course notable for his strong Irish roots, and president elect Biden kindly spoke to us about how much Ireland means to him and again, WWN wants to place on record its immense gratitude to Biden for taking time out from president reject Trump’s Coup d’état to speak with us:

BIDEN: Gosh, thanks so darn much folks. I hear that Irish brogue loud and clear down the phone line.

WWN: Many here in Ireland are losing they’re fucking shit at even the slightest hint you might have given a nod to Ireland in some imperceptible way. But in what way does your Irish Catholic background feature in your life?

BIDEN: Like most Irish people I only wear recycled St Brigid crosses as underwear and put Guinness in my cornflakes every morning.

WWN: Could you tell us a little about your Irish ancestors? Is it right your great-great-great grandfather is from Mayo?

BIDEN: Well yes, but technically he was conceived on the site of what became Croke Park, and his mother gave birth to him atop the Cliffs of Moher – firing him off directly into the Atlantic ocean where he caught a piggy back off Fungi up to the Giant’s Causeway, and it was there he wrote The Fields of Athenry while looking through a telescope aimed at Galway… a very typical Irish upbringing you could say.

WWN: Your love of Seamus Heaney is well known, are there any other Irish artists whose work you admire?

BIDEN: Who started the Bono is a Pox graffiti? That lad’s getting the presidential medal of freedom from me.

BIDEN: Here’s the deal, I was in on Blindboy’s podcast from day one, before all the try hard aural hipsters jumped on board. Any acid house remixes of Enya and I’m there. Contemporary stuff; ya have your Denise Chailas, your Kennedys, your SOAKs, but Picture This? Picture me fucking me radio out the window when they come on, wha?

WWN: Us Irish we have a fascination with death, not to be too pushy but is the rumour that you have a plot earmarked back here in Ireland true at all?

BIDEN: Arragh here’s the deal, I’m not bothering with a casket – I’ll be buried in between two slices of Brennan’s bread and lowered into a plot filled with Irish stew.

WWN: I know your time is precious so shall we do a quickfire round?

BIDEN: Ah c’mon, “We had dreams and songs to sing…”

BIDEN: Jesus, what’s happened to that Linehan fella a’tall a’tall, is he still on the Twitter?

BIDEN: You try to serve me Lyons and I’ll… [is heard speaking to aide in room with him] is Guantanamo Bay still open? Yup, I’ll thrun ye in there.

WWN: Is this year Mayo’s year for Sam?

BIDEN: My guys in Area 51 are trying to break the Mayo Curse as we speak.

WWN: Thank you so much president elect, we suppose all that’s left to ask is do you have anything left to say the Irish people?

BIDEN: Taytos, hang sandwich, watching Glenroe of a Sunday, the RTÉ fella who slipped on the ice, who’ll take the horse to France, A1 Sharon, Riverdance, we’re all part of Jackie’s Army, zip up your Mickey, Boyzone dancing on the Late Late! Oh and I don’t want a fucking service station plaza like Barack, you try to pull that shit with me and I swear t’God. Build me something decent.