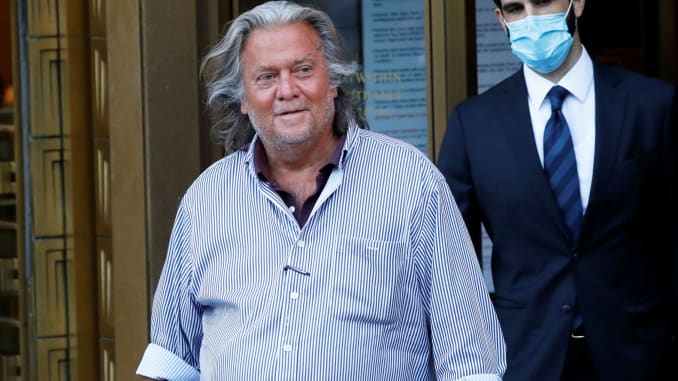 STEVE BANNON, most recently heard offering election punditry on RTÉ’s Drivetime radio programme, has found himself at the focus of US media after he encouraged the beheading of US Coronavirus taskforce member Dr Anthony Fauci and FBI director Christopher Wray.

It is not yet known if US police have been in touch with the Irish broadcaster to warn them about the true identity of someone they presumably thought was a normal pundit, but have warned others to distance themselves immediately from him.

Questions have been raised about how RTÉ vet their guests after some basic online sleuthing revealed the man they introduced on radio to listeners and spoke to like he was a political pundit had been arrested on charges of fraud and was out on bail at the time he appeared on the show.

Bannon, best described as an amorphous unhealthy blob of pulsating bile on the brink of explosion, was also a one time board member of Cambridge Analytica, famous for harvesting the data of million of US voters in the run up the 2016 election.

“Oh God, it gets worse apparently he’s an avowed white nationalist that has consistently promoted the idea of a race war through racist dog whistles. I really feel for RTÉ, they’ll be shocked when discover all this about him, but how were they to know?” shared one radio listener.

In a statement yet to be issued it is believed RTÉ will state they thought they were interviewing a completely different Steve Bannon. And that in their defence, alongside offering a platform to bottom feeding parasites they also interviewed Sean Spicer.