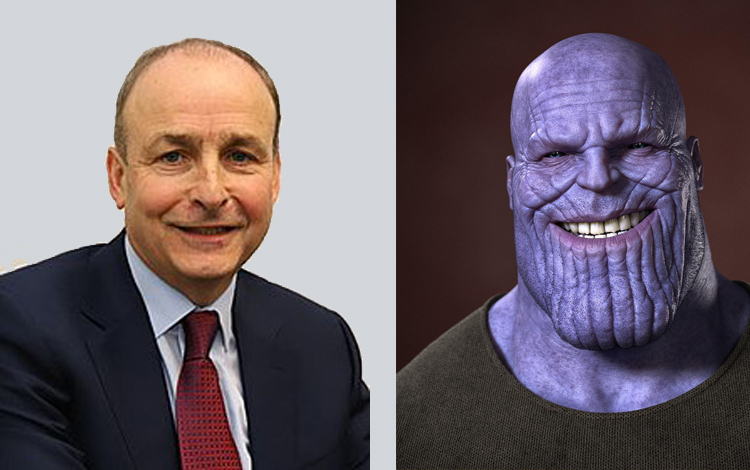 AS THE Green Party were being roundly mocked for having Hulk actor and activist Mark Ruffalo participate in a Zoom call with the party, urging members to back the coalition programme for government, Fianna Fáil members were also busy on Zoom hearing from a famous name in the world of villainy.

Worried Fianna Fáil party members could be wobbling when it comes to voting in favour of entering government, party leader Micheál Martin enlisted the help of someone whose destructive and devastating crimes against humanity are so notorious, diehard Fianna Fáilers couldn’t help being starstruck and ultimately swayed into backing the deal.

“Members, allow me to address the issue of the programme for government. Lament not the souls of puny fools, you must exploit, punish and crush – it is the Thanos way, it is the Fianna Fáil way,” the purple intergalactic demi-God Thanos implored from his cramped home office, the Wifi occasionally cutting out.

“Think not about the damage that this could inflict on Fianna Fáil but think of the damage you as Fianna Fáil can inflict on the country,” Thanos, responsible for killing half of the world with a click of his finger, added unaware his Zoom mic was still on mute.

“Christ, he was a moany prick, wasn’t he?” remarked Thanos, shortly after vaporising Éamon Ó Cuív who continued opposing the tri-party government throughout the Zoom meeting, with Mr. Martin concluding the call by thanking Thanos for his support, promising the Titan resident the last Infinity Gem if he annihilates all political competition.

Elsewhere, Fine Gael has delivered a terrifying prognosis if a programme for government wasn’t ratified, stating that Ireland ‘would face a second election’ in which voters can actually vote for the government they want, and not some concocted mess no one needs.