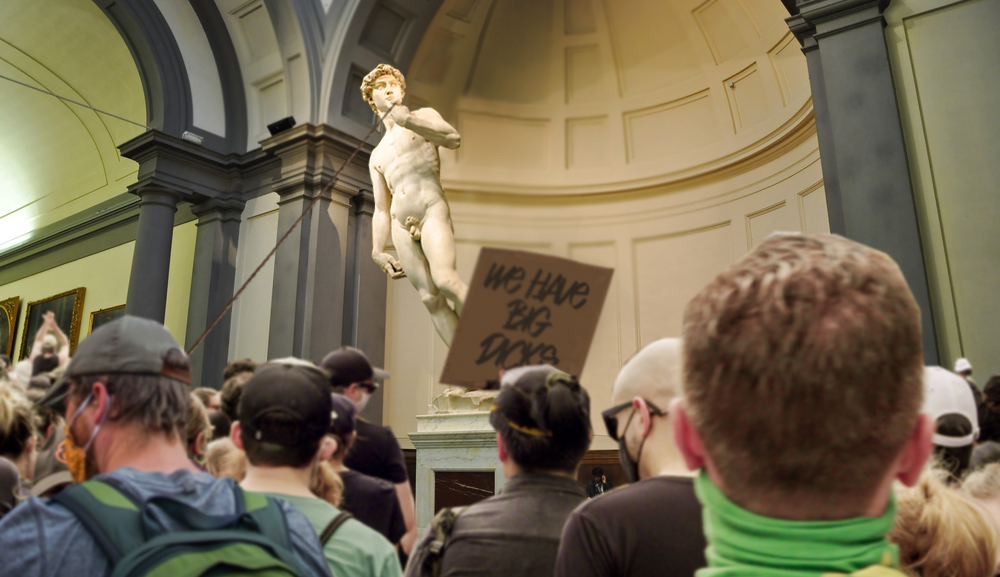 HISTORIANS and art enthusiasts alike have called for more action over an ever growing trend in statue defilement today after protesters tore down and permanently damaged Michelangelo’s David over what they claim is ‘harmful’ stereotypes about white men’s penis size, WWN can confirm.

Last night, dozens of caucasian men descended on the Galleria dell’Accademia in Florence, Italy, and began rocking the 16th century artwork back and forth, before crashing it to the ground and kicking at the statues nether regions.

“For centuries people have been posing for pictures while pointing and laughing at David’s tiny white dick, causing undue pain and suffering to the white community,” one protestor defended the act of vandalism, insisting the group of white men weren’t angry because they themselves have small penises.

“No, no, we’re just saying it’s a racial stereotype and nothing to do with us personally; everyone here has really big dicks,” the man swore, with more men coming forward in a bid to defend their manhood.

“Michelangelo obviously used a nude model who had to stand in a really cold room all day; that’s why David’s member looks like a terrified turtle,” put another worried looking man who was exuding Small Dick Energy.

Security at the Galleria dell’Accademia managed to break up the destructive mob, successfully salvaging the now chipped and scuffed genitals belonging to the statue.

“Thankfully David is made from a tough grade of marble and its teeny weeny puny peeny is still intact for future generations of insecure white men to feel uncomfortable about,” confirmed director of the gallery, Cecilie Hollberg.