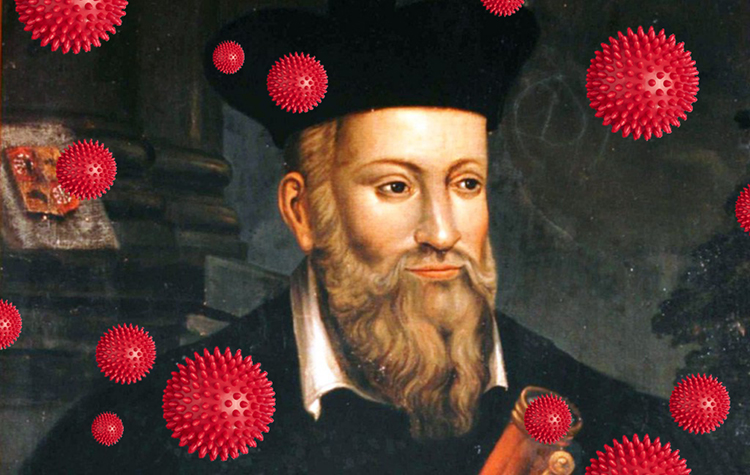 A PREVIOUSLY undiscovered Nostradamus quatrain has detailed the rise of fake Nostradamus predictions which he said would mislead people into thinking that the 16th century seer foresaw events like the Coronavirus and toilet roll shortages, WWN can confirm.

Michel de Nostredame, aka Nostradamus or Nostra to his mates, penned Les Prophéties, a collection of 942 poetic quatrains allegedly predicting future events but warned of a ‘fantastic spider web of lies’ which would misquote his writings in the early 21st century.

“In the year of two score (2020), the spider’s web (internet) will spin all across the world with yarns of old that I have not told to create finger gold (online revenue) for rogue scribes,” the quatrain read, calling out internet websites and memes fabricating his predictions.

Elaborating, the quatrain went on in more detail to rubbish the fact he never actually mentioned anything about a virus at all.

“The worm in hiding that I never described won’t stop them citing my vague old writings, while bum paper wiping will leave them all dividing, they’ll put the words in my mouth like bolts of lightning,” Nostradamus’ prediction continued, obviously not realising at the time that a worm in hiding was the Coronavirus, thus predicting his non prediction of the prediction.

In a similar instance, a blind mystic by the name of Baba Vanga from Bulgaria who predicted 9/11, Brexit, the rise of Coldplay and fidget spinners before dying in the 1990s has also been misquoted to have predicted the virus, with her surviving family members confirming that she actually didn’t predict it per say, but said Baba would probably take the credit all the same.

“Yeah, sure why not; it’s the fucking internet, who cares at this stage anymore what’s real or not,” a family statement read, “whatever floats your boat”.