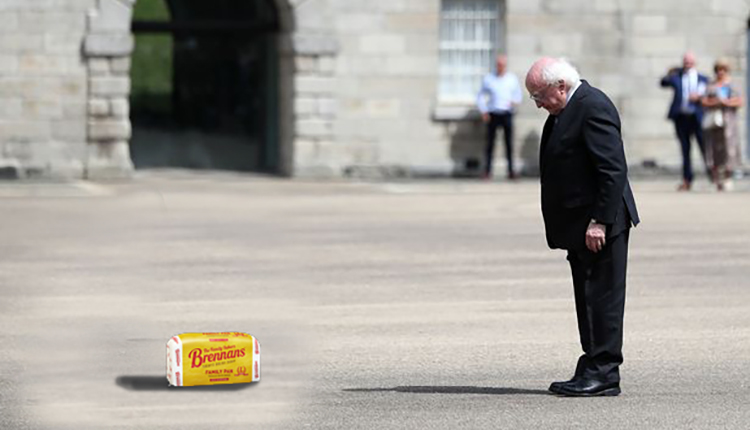 THERE WASN’T a dry eye among the crowd gathering to mark the second anniversary of the ‘Beast from the East’/’Big Snow’ of 2018, as the nation came together to never forget to remember to never forget what we all went through on those fateful days.

Placing a ceremonial sliced pan in acknowledgement of how the country lost it’s fucking mind because of a bit of snow, a tearful President Michael D. Higgins was seen mouthing ‘never again’.

The memorial site in Dublin will be expanded in the coming years to incorporate a 90 foot statue of a sliced pan which will have a waterfall cascading down its side to represent the tears of the nation.

Emotional tributes were paid to those victims who were confined to their homes for a day, two days tops and those who still to this day talk about how it was a right pain in the hole trying to get the car out of the driveway.

“Never forget,” began President Higgins’ stirring speech, “it is our greatest shame that we have no visual record of what the nation went through in 2018,” he added, seemingly forgetting the 4.2 billion photos the Irish public took of the snow and regularly reshare on social media accompanied by variations of ‘I must be the only one who remembers the snow, d’ya remember the snow? Gas’.

The moving and impeccably put together state commemoration was brought to a close by singer Enya, who sang an original composition about the Big Snow called ‘The Lonely Ballad Of Mild Inconveniences’.

A minute’s silence was held at Lidls around the country to commemorate the loss via JCB attack, of one beloved branch of the supermarket.