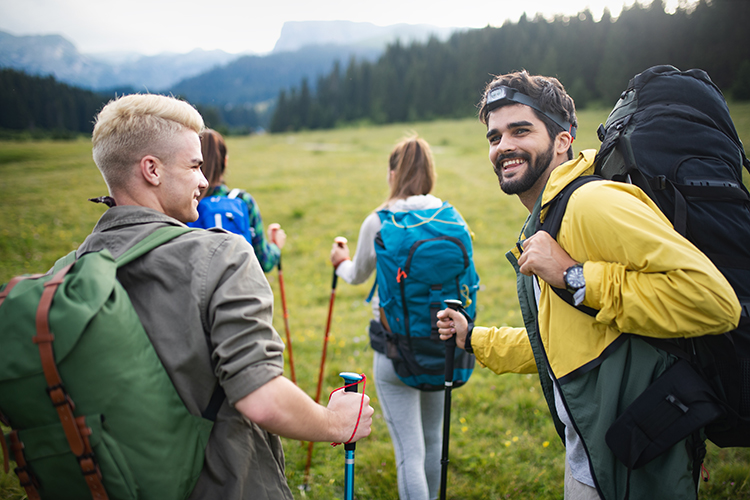 KITTED out in brand new, freshly purchased hiking gear that even Bear Grylls would consider excessive, a group of intrepid Dubliners are sticking out like the sorest of thumbs during their weekend sojourn to County Clare.

Looking like walking advertisements for North Face, Columbia and Patagonia clothing Conor, Jack, Graham, Kev, Leann and Sorcha have spared no needless expense in anticipation of tackling various dangerous terrains referred to by locals as ‘the stroll down passed the pub’.

“No man left behind alright guys,” barked Jack, ready for whatever the 2 kilometre walk, including a brief and very slight incline, throws at him and his band of fearless adventurers.

Not wanting to appear like helpless urbanities, the Dubliners have attempted to blend in with the locals during their brief stay by doing stereotypical things only people from Dublin do when touring Ireland such as throwing some Irish phrases around as they speak, drinking a pint of Guinness with a pained expression like you’ve been directly reconnected to the souls of the Famine dead and marveling at the presence of a fire in a pub.

“Not long to go, guys, but God above, isn’t amazing to be amongst nature like this,” added Conor, carefully studying a handheld GPS mapping device he bought on Amazon for €500 with this weekend in mind.

Some worries were expressed by the hiking group as it drew closer to 3pm and they feared they could lose the light soon, meaning the large 40 foot marquee, mobile spa and gin bar they packed in their rucksacks might have to be used.

“Guys, we might have to camp up. Who has the flares in case we need to alert the coast guard to our location? We can draw straws on who we eat first,” Graham asked, standing no more than 50 metres from the nearest McDonalds.