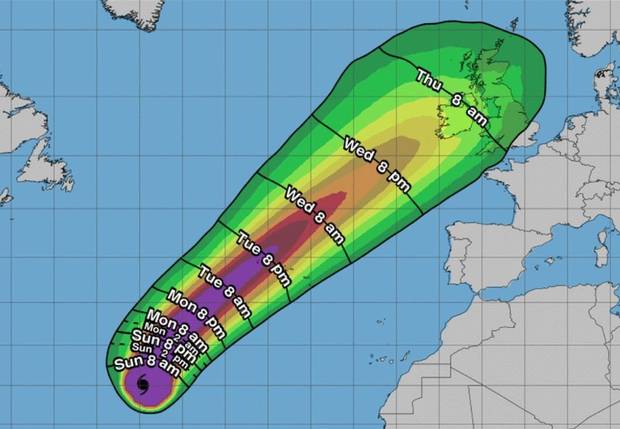 WWN has got its hands on all the extensive and calm reporting on Hurricane Lorenzo done so far by the kindly Irish media and their online counterparts and we have melted it all down to form one ‘super article’ with only the best nuggets of scaremongering forecasting taken completely out of context in an effort to make you panic.

In an effort to prove we’re not completely irresponsible we have also burned all copies of the fairly sober analysis conducted by Met Éireann to present you with only the most exaggerated worst case scenario on offer:

1) You’re already dead and what you’re experiencing now is actually purgatory. You’re inside your very own episode of ‘Lost’, but instead of a sunny Hawaii for a location and a sexy Evangeline Lily and Josh Holloway for company it’s rain sodden Ireland.

2) The entire country could be reduced to rubble and resemble an upmarket Navan. Like we said, this is the worst case stuff. It’s going to awful. Prepare yourself.

4) Rainfall of 1 millimetre will result in the roads being flooded, bringing traffic chaos and downright unsafe conditions for many members of public. Technically this has nothing to do with Hurricane Lorenzo and more just an average day on Irish roads looked after by councils that never bother clearing up leaves and debris that build up around and block drains and shores.

5) Rainfall of 90 billion metric tonnes per second is expected, or to put it in layman terms; it’ll be like holidaying in Galway.

6) You’ll feel very guilty about not checking in on your elderly or infirm neighbour. This will kick off an existential crisis during which you argue with yourself in your head, asking yourself why you’re like this and why you can’t just be a decent human being and knock in and check on them. It’ll momentarily ruin your evening.

7) Conditions on the ground will be horrendous, you could lose your footing and as a result let your smart phone slip out of your hand and the screen will crack. Horrifically it will be the sort of screen crack that isn’t bad enough to justify bringing to the shop and parting with €70 to fix it, it’ll be the sort of crack you can live with but it will drive you fucking mad having to stare at it.

8) All forms of communications and internet will be knocked out and the country will have no power. Under emergency protocols, the government will send out Brendan O’Carroll and Twink door to door to provide the internet-less nation with ‘entertainment’. As the weeks pass and food shortages kick in, O’Carroll and Twink will be sent out again, but this time as essential food.

9) You should be able to get away with pretending Hurricane Lorenzo is the reason you’re 6 hours late to work and stinking of alcohol.

10) Anyone suggesting Hurricane Lorenzo could turn into Gentle Breeze Lorenzo by the time it hits Ireland will be shot on sight by the Irish media.