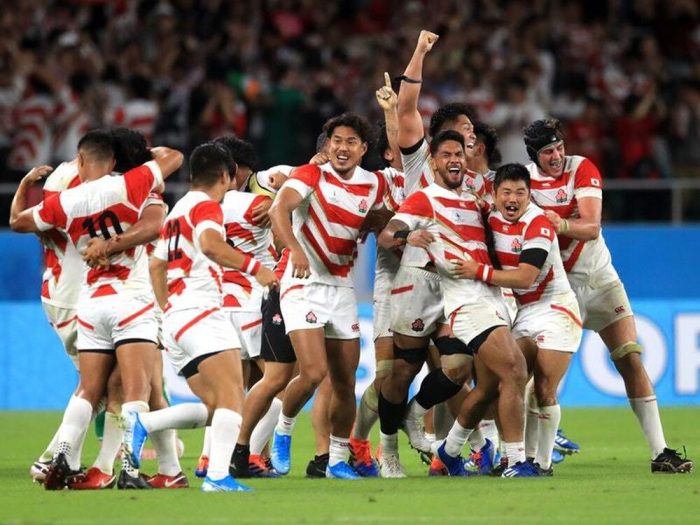 IN THE WAKE of Japan’s ‘Brave Blossoms’ beating Ireland’s ‘Stale Gone Off Guinness Farts’ many die hard rugby fans who took up supporting the boys in green two weeks ago are reportedly looking to switch their allegiances to the sort of plucky underdogs you can actually rely on.

Absolutely sick to death of wall to wall adverts starring Irish rugby players selling you everything from broadband to fungal cream? Or do you just have a very rational dislike for the entitled and elitist rugby-supporting D4 crowd? Then switching allegiances to a team with a can-do spirit could work for you.

Here’s how to slyly and subtly switch your allegiances to Japan:

1) Moan nonstop about how shit Ireland are for another few days before officially switching.

2) Ireland lost 19-12, not 19-16 the unpatriotic shower of cowards. But to be honest it’s mainly the TV ads, they’d wreck anyone’s head. Japan are great and all, but the more we think about it, the more we hate seeing Conor Murray or Rory Best on TV every 5 minutes selling us sofas made from protein or whatever the fuck he’s at.

What was he doing filming ads anyway? He should have been off training, you wouldn’t see Kotaro Matsushima or Yu Tamura doing any of that.

3) The next step is to hand in your Irish rugby supporters badge, your six-pack of Heineken and your weird posh American sounding accent to the relevant authorities. Stick on “Turning Japanese” by the Vapors to prove to Japan you’re a sensitive type, ready to completely embrace and understand their culture and customs.

4) Declare out loud for everyone to hear how much of a disgrace you think every single person involved with the Irish team is, and how they should be boiled alive in their own piss for their sins. After all you’re a loyal supporter, who backs your team no matter what even after a defeat, this Ireland team doesn’t deserve you. It’s time to learn Japanese.

5) Enter a ‘reeducation’ programme which will bring you up to speed on how to support a passionate team like Japan. You’ll get an insight into what it’s like support a team that you don’t need to suddenly abandon or want to see hung drawn and quartered after an unexpected loss.

6) Get into really weird Japanese Anime pornography. Judging by the available data on some supporters, plenty of you have got a head start on this.