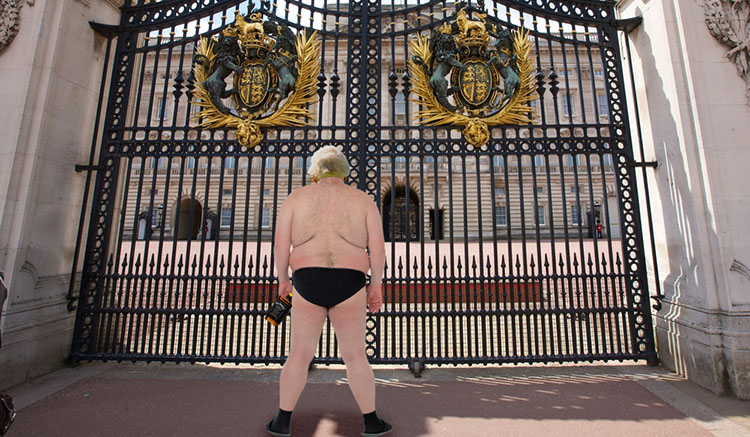 BLASTING breakup songs from a stereo and knocking back a 6-pack of Lech purchased from a nearby Lidl, continually disgraced prime minister of Britain, Boris Johnson, has shown up at Buckingham Palace topless, pleading with the Queen to forgive him after the UK Supreme Court ruled he lied to her about his justification for proroguing parliament.

Johnson, shouting the words “can’t live if living is without you” from the song Without You by Maria Carey, could be heard begging the Queen not to ‘Diana him’, but in true Johnson fashion the Tory leader only managed to make things worse.

As Johnson began mumbling incomprehensibly to himself and soiling his trousers, onlookers did not suspect the prime minister was acting out of character at all, however, when he began admitting to lying they concluded he was tremendously drunk.

“Everyone knows the Queen is a sucker for a pale pink nipple, but Boris drunkenly trampling on a few corgis didn’t help his case,” shared one Palace official, who would spend the remainder of the day disinfecting the windows Johnson pressed his nipples against.

Drawing inspiration from that famous scene in Love Actually, Johnson wrote a series of romantic overtures on some cardboard in the hope the Queen could be swayed.

“Between illegible handwriting, poor spellings and spilled beer it was hard to make out the words, but he definitely wrote ‘Sore Wee’, so he was either apologising or admitting to having an STI,” added the Palace official.

Visibly disorientated, Johnson’s pleading came to an end as was tackled to the ground by the Queen’s Guards after he began chuckling and scrawling on the sign for Buckingham Palace, attempting to change it to ‘Fuckingham Palace’.