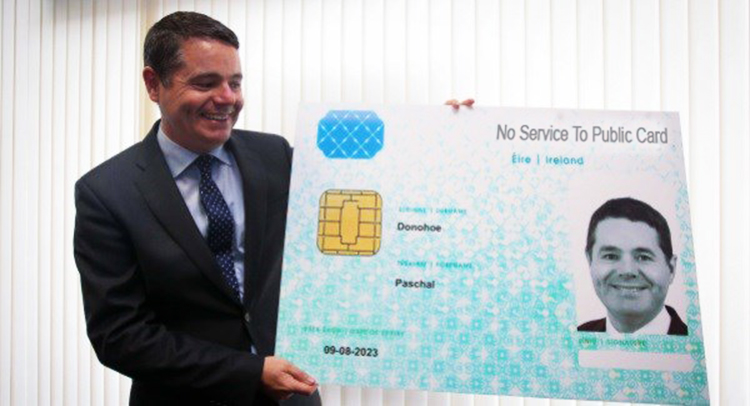 GOVERNMENT TDs are to be issued with new ‘no service to public cards’ (NSTPC) following a string of poor decisions involving public money, which has cost the Irish taxpayer billions of euro in wasted schemes, builds and internal inquiries into mismanagement within the government.

Flanking their stunning incompetence, TDs and ministers alike stood hesitantly with giant sized samples of the compulsory ID cards, which are to be used to log and track each minister’s failings over their term in office and used to dictate their future salaries going forward.

“If a government minister continually fails in their role they will be docked on a points system which will be held on the card’s chip,” creator of the new NSTPC cards, the Irish Public explained, “when a TD hits 12 points they will automatically be suspended from office indefinitely with no salary, which we think is very fair considering jail as another viable option”.

Speaking at the launch today, Taoiseach Leo Varadkar voiced concerns over the new TD card system after he was already given a 9 point penalty on his card for various mismanagement issues, including the housing crisis, trolley crisis and CervicalCheck crisis since taking office.

“It’s 10 now! How is it 10?” the Taoiseach asked, after yet another point registered on his card, “I’m not sure about this… ah fu-eleven? Eleven? Jesus Christ”.

So far since the card’s launch this morning, 7 ministers have been fired, with the Irish Public now contemplating issuing the cards to all public sector employees working in offices such as the HSE and An Garda Síochána.

“We’ll have this place cleaned up in no time,” the Irish Public concluded.