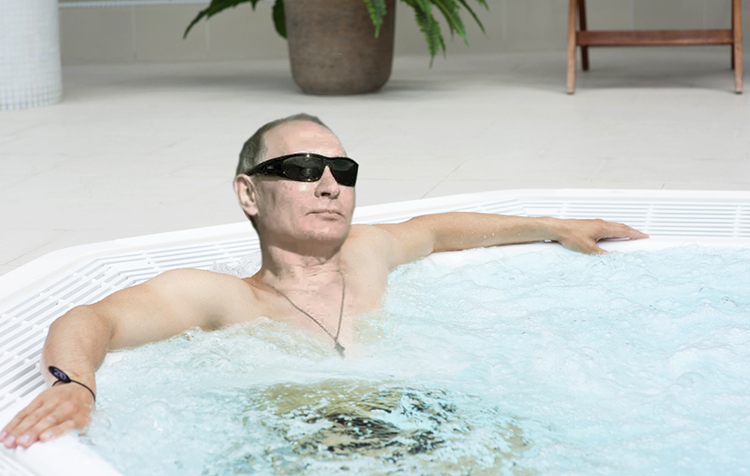 RECLINING in a hot tub and wearing shades, Russian leader Vladimir Putin took a well earned break from further sowing the seeds of discontent and divisiveness throughout Western democracies and finally administered some ‘self care’ by taking a well earned day off.

“This…is the life,” Putin said to himself, basking in afterglow of his latest work including attempts to funnel money to Italian far right party Lega Nord and spread fake news in Ireland of all places.

Ever the workaholic Putin’s day off became a time to reassess all he is doing to help Western democracies and capitalism to buckle and crumble thanks to a flood of targeted Russian misinformation. However, he occasionally allowed the jet of water bubbling away at his anus do its job and transport his mind elsewhere, leaving it to his military generals to decide what war crimes to commit in Syria for today.

“No one said it would be easy, but no one said it was this much fun either,” added Vlad, now sipping champagne and dreaming of yet more resurgences in far right extremism across the world that, if all goes to plan, could see countless innocent people die.

Putin could relax on his first day off in God knows how long safe in the knowledge that thousands of Facebook and Twitter bots were constantly overwhelming forums and comment sections with messages that sought to undermine confidence in the democratic process and the trust in the EU.

“Fucking idiots, the lot of them,” concluded Putin, who vowed to make sure he gave himself a break and do this day off thing more often.