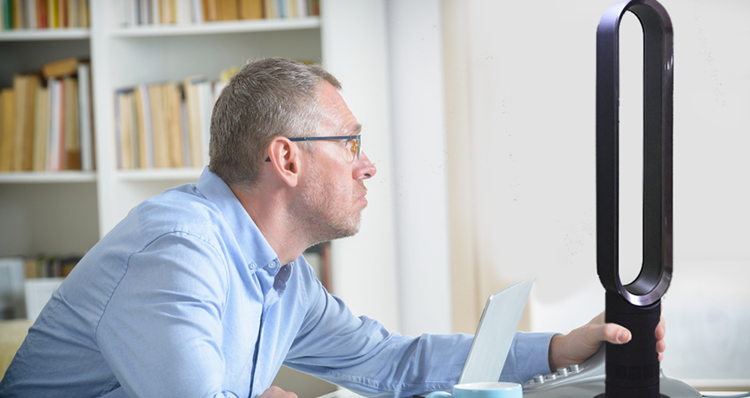 WHEN quizzed about the four hundred euro he spent on a Dyson Hot and Cool fan heater last summer, local man Eric Cinnerton has stated that it was ‘money well spent’, adding that he doesn’t regret the seemingly extravagant purchase of an item which does a job a much cheaper product could easily replicate.

Although coming in at a hefty price tag that far eclipses the 12 euro or so that a normal fan would set you back, 36-year-old Cinnerton claims the sleek-looking tower fan bathes him in ‘way cooler air’ during the eleven or so warm summer days when a fan might be necessary, as well as having a ‘hot’ setting should he ever feel the need to have hot air blowing around the room.

Shaking off rumours that he was ‘a bollox who made a stupid bollox purchase’, Cinnerton slammed his critics as a bunch of ‘too-warm pricks who can only afford to shop in Argos’.

“It’s a legacy purchase,” stressed Cinnerton, looking very heated for a man who spent 400 euro on being cool.

“It’ll do me for years, not like those 20 quid fans you lot have that are probably going to break after a year anyways, and then you’ll have to buy another one! It’s madness! Instead of buying a new fan every year for twenty years, you should have done what I did; pay the price of a PlayStation for a fan that’s so quiet, you wouldn’t know if it was working half the time”.

Cinnerton also added that on the 51 weeks of the year where his expensive fan isn’t needed, it makes a very good place to hang a coat, ‘so stick that up your hole’.