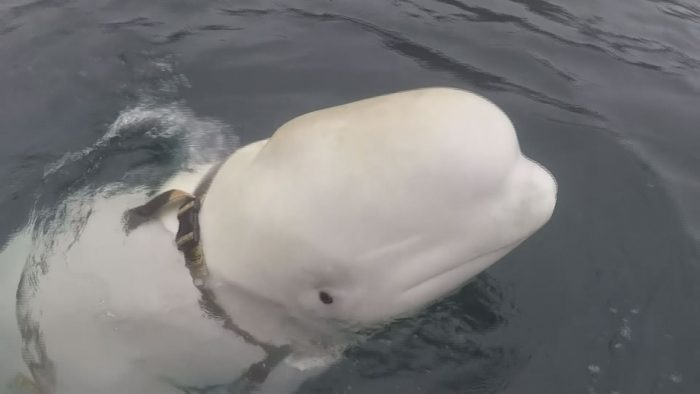 A BELUGA whale spotted off the coast of Norway has denied claims that is an agent for the Russian government, insisting that it was only visiting the region to ‘see Fjords and shit’.

Norwegian fishermen were the first to spot the animal in the waters around Norway’s coastal waters, and were perplexed to find that it was wearing a harness with ‘Property Of St. Petersburg’, prompting suggestions that the animal was part of some secret division of the Russian Navy.

The whale itself agreed to be interviewed on national TV to stress that it had simply visited the region to check out the local attractions, similar to how two completely innocent Russian gentlemen were accused of being Kremlin assassins in Salisbury last year.

“I had seen online about Norwegian Cathedrals, the finest in the world” chimed the whale, shifting nervously around its tank.

“Now, people are accusing me of being part of some Day Of The Dolphin mine-sweeping and surveillance type of unit… I am not part of the Russian Navy. I just want to continue my holiday. The harness? I got that on a stag weekend. It’s just a joke. The tracking chip in my fin? My wife put that on me. This KGB special forces tattoo? I got it when I was a young calf, I must get it lasered off soon. This letter from the Kremlin with coded orders in my blowhole? I must have picked it up along the way. A lot of litter and rubbish in these waters. I suppose I am to blame for that too?”

The whale is set to be released back into Russian custody later today, where it will likely ‘go to live in a lake near Moscow’ and never be heard from again.