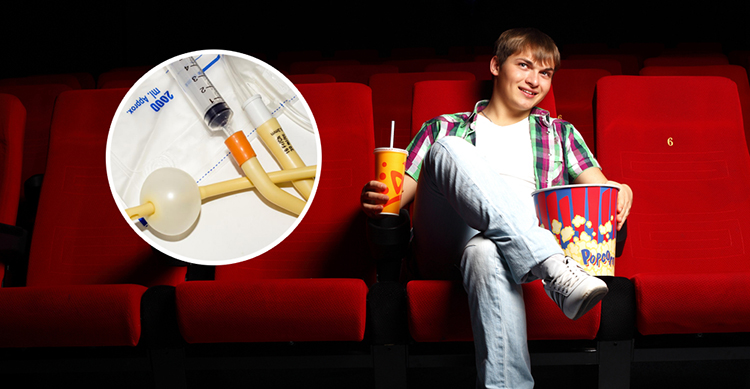 FOLLOWING the confirmation that the long-awaited Marvel extravaganza Avengers: Endgame clocks in at a bladder-smashing three hours and one minute, cinema chains around the world have announced that they will offer urethral catheters to customers who want to make it through the opus without running to the bathroom.

237 people were severely injured in cinemas around the world last year during screenings of Avengers: Infinity War as they ran in the darkness to get to the loo as quickly as they could without missing anything, and with Engame adding another 21 minutes to Infinity War’s two hour, forty minute runtime, cinema bosses decided steps had to be taken.

Cinema-goers wishing to avail of a tube up their infinity stone will be asked to arrive at cinemas early to allow the mostly teen-aged cinema staff to carry out the procedure, and full catheter bags will be deposited into special bins at the end of screenings, beside where you drop off your 3D glasses.

“Don’t forget; you have to wait around for another ten minutes to see the bit at the end of the credits, so the catheter is the best way to relax and enjoy yourself,” said one cinema boss we spoke to.

“This is a God send to cinemas, who were facing huge insurance bills for fans running out and smashing into things in the dark for fear of missing out on a pivotal piece of information in the movie. Endgame is the culmination of 10 years of storytelling, and these fans were either going to cripple themselves trying to get to the toilet and back in 30 seconds, or piss all over our seats. This is the best option, believe me”.

Keep an eye out for the Endgame Catheter Combo in your local cinema – large popcorn, large coke and a tube up your bladder for just 70 euro.