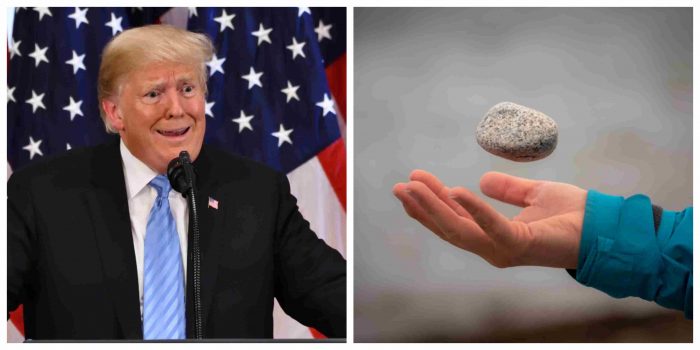 FOLLOWING his assertions that US troops could well open fire on asylum seekers from Central America in the event they throw stones while on the US-Mexico border, US President Donald Trump is said to have reached on to Israel for advice on how best to straight up murder people with arm themselves with pebbles.

Keen to learn all he can about dispatching a military force on a domestic border, opening fire on a crowd of civilians, murdering them and then carrying on as if this is all very normal, Trump is calling on Israel to share their secrets of how they police the West Bank with him.

“You heard the president you dipshits, it’s murdering time,” White House spokesperson Sarah Sanders said in a press briefing, as her soul visibly eroded away to nothing.

“The only problem is we don’t have the same experience at opening fire indiscriminately on crowds and calling it ‘protecting the country’ as Israel do, so I reiterate the president’s plea for Netanyahu’s advice,” Sanders added, with insiders suggesting the White House is in the dark about whether drone strikes on children playing on a beach is only viable in Israel.

Using the so-called migrant caravans as a way to stir fear in people he wants to vote Republican in the upcoming mid-term elections, Trump spoke at length about how the asylum seekers from Central America were 12 feet tall, had knives for teeth, smelled of Indian food, were diligent workers who weren’t as lazy as your grandchildren, and had been raised on a cannibalistic diet which saw them feed on nothing but former Miss America contestants.

The latest sorry chapter in Trump’s presidency has seen his approval rating among core supporters surge to 100%.