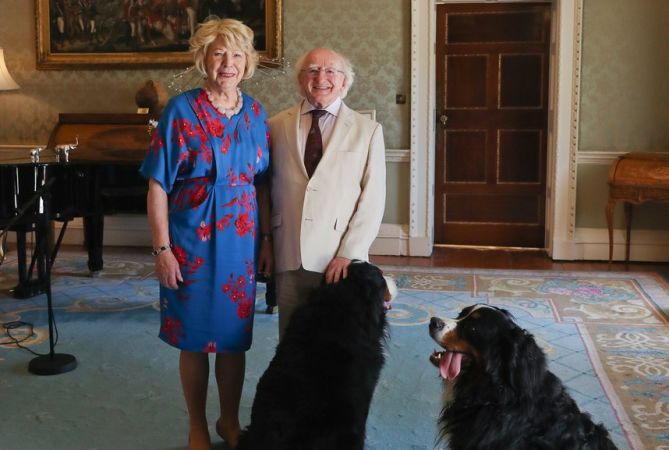 WITH a commanding 52% lead in the polls, President Michael D. Higgins has eased off the gas on the campaign trail, and has stated that he’ll probably spend the next four weeks just posting pics of himself and his two massive dogs on social media “and still coast this fucking thing”.

While Higgins sits comfortably at 62% support, his nearest rival Sean Gallagher currently sits at a dismal 15% approval rating among focus groups, which coincidentally is the same percentage of people who didn’t understand the question they were being asked.

As such, the 77-year-old sitting president isn’t going to go ‘liathroidi amách’ between now and the election, and will instead just rock out with Bród and Shadow, his two massive Bernese mountain dogs.

“I don’t even need to leave me gaff,” chuckled Higgins, while watching Sinn Féin announce their candidate for presidency for some reason.

“I’ll just walk the dogs down to the fence, throw them a ball, give them a pat, and passers-by will have that shit viral before tea-time. Then let all these other lads run around and waste their money trying to convince people that they need a new man or woman for a job which requires fuck all other than to shake hands and open community centres. I’ll be here watching The Chase”.

Higgins then went into the garage to get his little step-ladder, so he could pat his dog on the head.