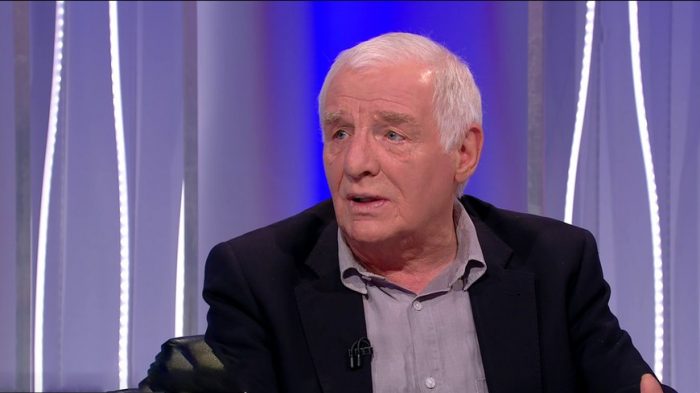 Eamon Dunphy broke down in tears and had to be consoled after Paul Pogba had a great game while also having the audacity to have a haircut.

“It’s okay Eamon, it’s okay,” Darragh Moloney was forced to say as he patted Dunphy on the shoulder as the pundit got tears all over the big screen tactics board RTÉ use.

Now bashing his fists into the monitor, a crying Dunphy screamed “why, baby, why?” before opening a locket dangling from his neck which contained a framed picture of Marouane Fellaini.

France booked their place in the final with an ominously controlling 1-0 win and performance.

Superstar teenager Kylian Mbappe is currently at a crossroads in his career, in much the same way Anakin Skywalker was in the Star Wars prequels.

Undoubtedly talented, Mbappe’s performance, brilliant throughout took a turn for the dark side when he decided to choose diving.

Giroud, the focal point of France’s attack squandered 89 chances in this game making him only marginally less shit than Raheem Sterling.

Samuel Umtiti’s glancing header which opened the scoring saw him out jump Marouane Fellaini who had 4 feet on him if you include his afro.

Umtiti’s celebration, a sassy sashay, has become a runaway meme success. So impressive and confident was his strut it is believed he is one of the favourites to win the next season of Ru Paul’s Drag Race.

Belgium were unlucky on the night and couldn’t find a way through an organised and disciplined French team. Eden Hazard consistently tried to get his team going but was stopped time and time again by N’Golo Kante who he has since taken a restraining order out on, citing ‘excessive stalking’.

As the game progressed Belgium faced going out of the World Cup, and with a place in the final of the biggest tournament in the world at stake Belgium… sort of didn’t really do much as the French saw out the game in pragmatic fashion.

Over on the BBC, Gary Lineker spent the entirety of the station’s coverage nodding and winking to camera and saying ‘which one of these teams will play England in the final’.

Ahead of England’s semi final against Croatia its easy to be down on our nearest neighbours. But it is hard to discount the fact it is an amazing year for English football if you ignore the FA’s treatment of Enio Aluko as she suffered racist abuse at the ends of now former England’s women’s manager and the fact countless professional football clubs are embroiled in abuse scandals which saw young academy players sexually abused by a number of football coaches.

Elsewhere, FIFA president Gianni Infantino has followed through on his promise of inviting the children from the Thai soccer team who were trapped in a cave to the World Cup final. Charging them just €1,000 each per ticket has been described as an ‘incredibly generous offer’.