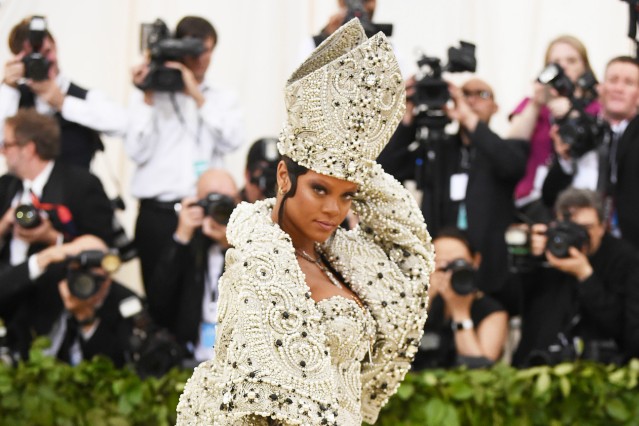 RIHANNA’S SHOWSTOPPING Met Gala look needs no introduction at this stage, ‘RiRi’ absolutely slayed it in her stunning Maison Margiela dress which nodded to the Papal crown, and now thanks to Penneys shoppers can get their hands on a knock-off for just 5 euros. Praise be!

While Rihanna bedazzled in her bejeweled crown and straight up killed it, now we all get the chance to represent in a knock off which is presumably fractionally cheaper than the real thing. Some people may not believe in God, but we’re believers in the word according to Saint Penneys, our prayers have been answered as we can replicate the glam, all for the price of an overpriced coffee with almond milk.

Some shops have already sold out of the replica Maison Margiela number, but Penneys have promised to restock the crown and dress later this week in all sizes, a move welcomed by many shoppers.

“My youngest is making her communion next weekend and we wanted her looking lit as fuck, and now we can get our wish. No one is going to outshine her,” confirmed one enthusiastic parent online.

Fashion savvy buyers have had to make peace with the fact that in a bid to avoid claims of outright copying of the dress, Penneys have had to make some compromises with some details but it’s a small price to pay for being able to hit your local GAA disco, early house or wake in style.

“Okay, so the jewels and shit are basically bits of pasta painted gold and black, and a lot of the silver finish is tinfoil, I’m still rocking the look but I’m just worried… is it a bit much,” queried 21-year-old Jade O’Dowd, first in the queue to buy the dress in Penneys Dundrum branch this morning.

However, in the last few minutes, fashion experts have confirmed the outfit is not one bit ‘extra’.