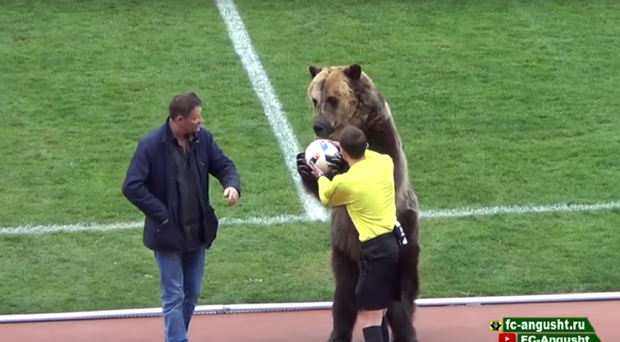 AFTER a recent spate of unsavoury incidents involving the intimidation of referees, Russia has proposed an innovative solution to the cancer on football that is professional footballers.

Famed for constantly diving to win penalties, cheating to gain minor advantages throughout each second of a game and having shit haircuts, footballers are potentially the only element about the upcoming World Cup that could possibly ruin it for fans.

However, Russia, fresh from annexing Crimea, interfering in international elections, poisoning people on English soil and aiding and abetting the murderous Assad regime, may have the solution all football fans can get behind: bear referees.

After successfully trialing a bear as an official ball carrier at a recent Russian third division match, Russian World Cup officials have confirmed they will go ahead with plans to allow referees officiate all games at the 2018 World Cup.

“Anyone try to do like Buffon, referee Bear will do to player like Leonardo Di Caprio in film Revenant,” explained bear tamer and head of refereeing at the upcoming World Cup some people are somehow still looking forward to, Igor Siminov.

Initial training has shown bears seem to have a better grasp of VAR than human referees.

While many people have decried the use of an innocent animal in such a way, stating the presence of bears in any capacity at the World Cup would lead to them boycotting the tournament.

“Really? All those North Korean workers killed building our stadiums and you care more about bear? Good, this shows you have respect for bear, makes him perfect for refereeing,” Siminov confirmed before cruelly yanking on a chain attached to the neck of a North Korean slave.