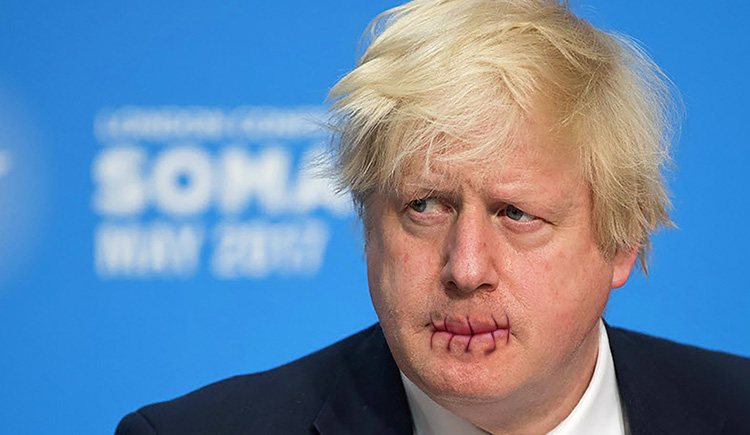 THE EU has heralded the progress made in Brexit negotiations in the hours following Britain’s decision to sew Foreign Secretary Boris Johnson’s mouth shut, limiting his ability to broadcast ridiculous statements.

“We cannot overstate the progress that has been made, truly, this is a watershed moment in the negotiations,” confirmed the EU’s lead negotiator Michel Barnier after a brief 60 meeting with Britain’s negotiating team which was void of Boris Johnson’s utterances for the first time.

Free from having to deal with Johnson suggesting passage between the border shared by Ireland and Northern would be easier than Angela Merkel after a night at Ockoberfest, Brexit talks were able to helpfully deal with substantive issues and not broad, confusing and contradictory statements.

“Can you hear that? That’s the sound of fucking silence,” an exhausted looking Theresa May declared with relief.

Pro-May Tories have welcomed the development, as it frees up the Prime Minister to be pummeled in negotiations by the EU without having to respond to the media when Johnson says something like ‘Afghanistan is only good for heroin’ or ‘Moroccan prostitutes are absolutely rubbish’.

“Well, if there’s anything we know about the French it’s that they give up, and the Irish get confused when a drink is put in front of them, and those Germans are a dour bunch, just don’t leave Poland unattended or they’ll nick it again,” Johnson said as the final stitches were sewn through his lips earlier today, with the Tory MP seemingly of the belief that his harmless and jolly buffoon routine could actually be the source of future economic prosperity in Britain, post-Brexit.

Johnson’s hands were also tied to a chair in a bid to limit his ability to write anything stupid on the side of a bus.