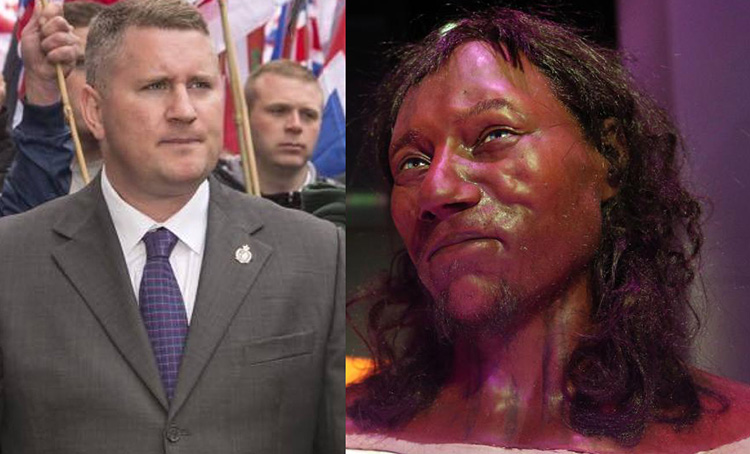 FURTHER DNA analysis into the remains of Britain’s oldest known skeleton has revealed that not only did ‘Cheddar Man’ have a much darker skin complexion than previously thought, but he may also have been capable of more complex brain functions than the average member of far-right group ‘Britain First’.

Cheddar Man, named after the gorge in which he was buried some 10,000 years after his death, had already caused considerable embarrassment for the pro-Brexit, anti-immigration group when scientists used his DNA to prove that Britons descended from a race of dark-skinned people, rather than appearing magically out of thin air with blue eyes and pale white skin.

Today, new data reveals that the ancient race of people were also capable of using tools, communicating clearly, and forming rational, well thought-out arguments based on more than sheer blind hate, putting them well above the intellectual capabilities of a member of a group who spend their time trying to insist they’re not racist while continuously doing racist things.

“Although there was no social media back then, Cheddar Man would have had access to cave paintings as a way to communicate,” said Dr. Ian Harkin, an archaeologist who helped in the extraction and study of the specimen.

“And we have found some of these primitive message boards which show that Cheddar Man discussed pretty much everything except ‘all these foreign lads coming over here, taking our Mammoths’, and there’s also no evidence to suggest that he frequently shared easily-refuted videos and memes that backed up his own shaky agenda. You have to slide quite a bit further down the evolutionary ladder to find that kind of behaviour, or just go to your nearest BF rally”.

Despite these findings, members of Britain First are insisting that the ‘leftist, snowflake views’ of Cheddar Man are ‘what resulted in him being killed out, innit’.