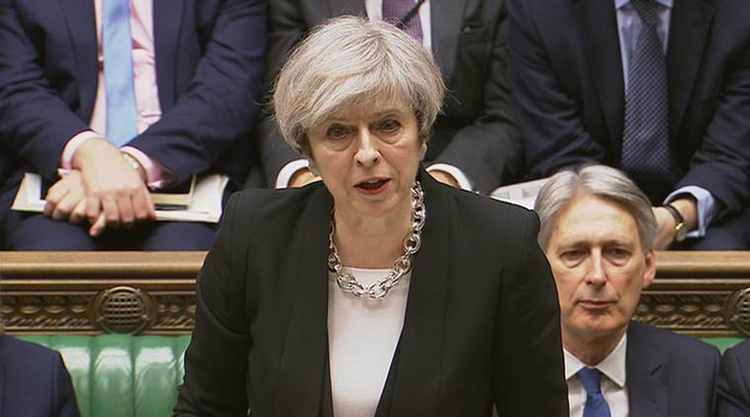 BRITISH Prime Minister Theresa May has shocked her political peers in a rare outburst this morning, which forced the House of Commons speaker to suspend proceedings for the time being.

Flanked by Brexit minister David Davis, Ms. May took to the podium before taking a deep breath and admitting things were not going the UK’s way.

“Right honourable… whatever,” a dishevelled May began, before crumpling up her reading material and throwing it over her left shoulder and hitting Mr Davis in the forehead, “we’re making a right fucking balls of this,” she said to a round of collective gasps from the House, “we have no fucking idea what we’re doing and the further we go with this Brexit mess, the worse it’s getting and I just can’t even… ”

At this point House of Commons speaker John Bercow attempted to interrupt the prime minister to call order, but was swiftly shut down.

“I’m not fucking finished, John!” May barked, the House now silent with disbelief, “the whole world is laughing at us and seem to be enjoying it, even the spud-munching paddies are joining in. This fucking shit show I’ve inherited and run into the ground is going to ruin everything. We might as well all jump on board the red brexit bus and drive the fucking thing off the cliffs of Dover, because no one here seems to know whether we want a shit or a haircut,” she said before turning to her bench and stating she was going home to bed ‘for a good cry’.

Sources at Number 10 confirmed the British PM has in fact locked herself in her room with a note outside stating that she’s ‘not coming out until everyone stops laughing at the UK’.