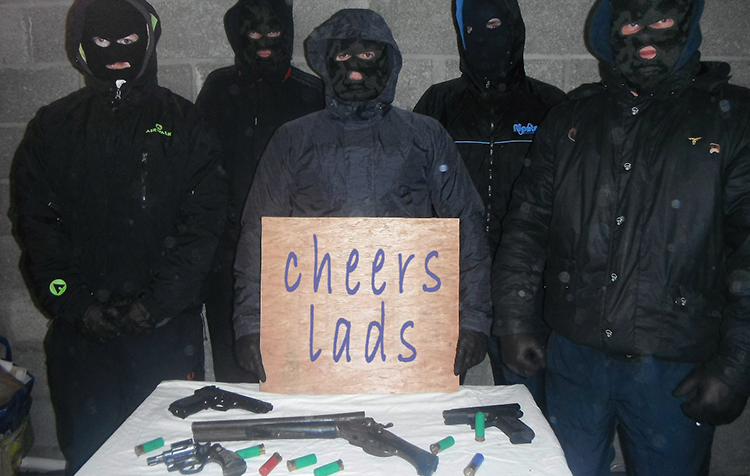 A CONGLOMERATE of national drug gangs have officially thanked the Irish public for their continued support over the past 30 years at their annual AGM in a Dublin City hotel this afternoon.

Boasting billion euro profits year-on-year, cartel bosses and henchmen donning balaclavas and flanked by armed personnel, also thanked the sitting press and the Irish government for their part in their ongoing reign of violence and terror, stating that they couldn’t have done it without them.

“We would really like to thank The Sunday World for their continued glamourising of our key players by giving them nicknames and reporting their wealth. Recruiting disadvantaged young men has never been easier,” said one boss, before turning to attending Justice Minister Charles Flanagan and winking at him, “and of course, we couldn’t have done any of this without the government’s incompetence and continued cuts on the Garda Síochána, whose corruption, may I add, is quite an inspiration to everyone working in our criminal network.

“Due your right-wing stance on cannabis, we wouldn’t be making a third of the money we are now. So well done on keeping that plant illegal, despite its vast array of medical benefits – making criminals out of normal people is usually our job, but I won’t complain,” he added, before pulling out a semi-automatic pistol and firing it three times in the air.

“And finally, three cheers for the Irish public; without your love of cocaine and your indifference to the fact you fund our bloodshed, we wouldn’t be here today… Hip, hip! hooray!” he shouted, between gunfire, “Hip, hip! hooray!”