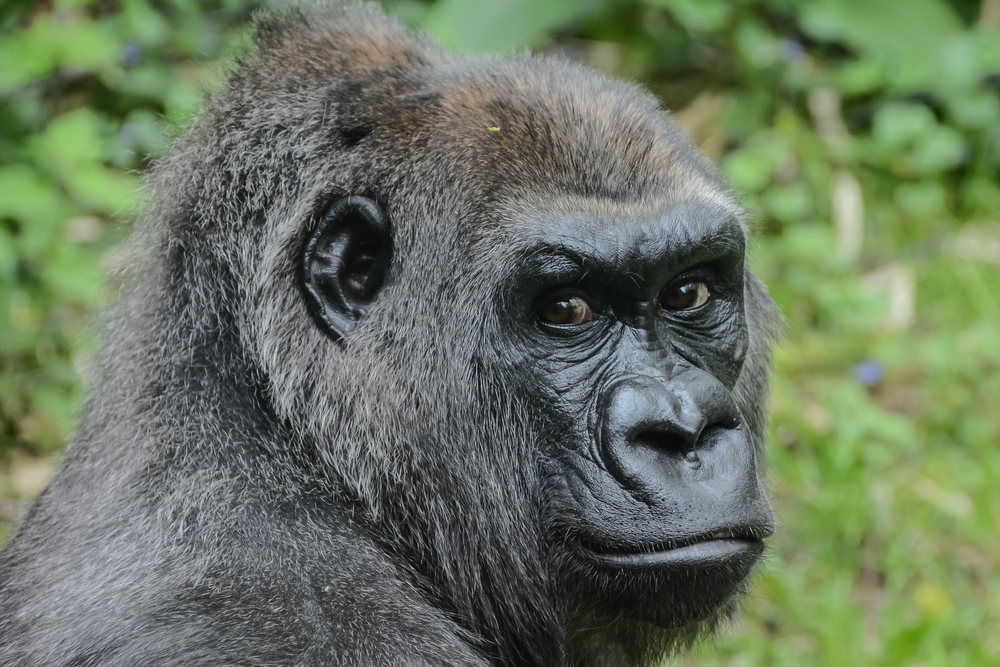 When I think of all those years I wasted, scraping my own shit from my hole and flinging it over the zoo wall at some poor prick eating a ham sandwich, I can’t help but feel sorry for all those other gorillas I left behind, explains Pluto, a laboratory test subject who has been trialling the effects of the hallucinogen compound N,N-Dimethyltryptamine for the past two months.

We arrived at the compound in Austin, Texas, at around 4pm, where we were greeted by Dr. James Fisher, lead researcher of the clinical trial.

“Good afternoon, we’re so happy you have come to see us,” Doctor Fisher said, “much of the mainstream media has ignored our attempts to get this out there. We really appreciate this”.

When we got the call last week about the talking gorilla in Texas, we were a little taken aback, and dare I say it, a little suspicious of the whole thing, but myself and my photographer Damien were intrigued, and literally begged our editor to fly us over.

“How is this even possible?” I blurted out.

“Why don’t you ask him yourself?” Fisher replied, now turning slightly to reveal a 175 lb greyback walking towards us, knuckles dragging through the harsh Texan dust outside the facility.

“Jesus christ!” Damien shouted, “is he actually waving at us?”.

In fact, not only was the primate waving, he began dabbing Damien in jest, lightening the mood, slightly.

“The fucking head on you man, ha-ha,” the gorilla said in a strong Texan accent, now outstretching its pudgy black paw, or hand, or whatever he called it, “I’m Pluto. How the hell are you guys?

Gobsmacked, we both complied, nodding in disbelief, and searching for signs of a zip, button, anything on the animals back to hint that this was not real.

“You guys are so pale and ginger. Where are you from? Are you orangutans?” the gorilla asked me directly, still laughing at our dumb expressions.

“I-I-Ireland,” I stuttered, staring directly into his soulful eyes, “DMT did this to you?”

“It changed my life, man. Highly recommend it,” Pluto said, now guiding us into what appeared to be a holding room, but with dozens of trippy posters on the wall, much like a teenager’s bedroom.

“Now guys, you’ve got five minutes with Pluto,” Dr. Fisher explained, before whispering into my ear, “he gets very tired after speaking, as you can imagine”.

As Dr. Fisher left us alone with Pluto, we all sat around a wooden table, littered with chewed up bamboo shoots and torn up Rizla packets.

“Don’t mind the mess,” insisted Pluto, now violently swiping the table clean with one arm, startling the two of us, “I’m still only learning to clean up after myself… and to be honest, I don’t get why I have to ha-ha, I’m a fucking gorilla!”

We all laughed nervously, like anyone would in this situation; being in a small room with an animal capable of ripping our limbs from our sockets and beating our torsos to a pulp with those said limbs.

“Tell me Pluto, when did you first realise you could talk?” I asked.

“It must have been about two weeks after my first hit of DMT. But the talking to myself thing happened straight away after. Some fucking slap off the stuff, man. In a hoop, I was,” Pluto said, now rolling what appeared to be a blunt on the table.

“Talking to yourself; as in consciousness?” I queried.

“Well, yes. The trip was super fucking intense. They stitched me good and made me smoke 100mg of DMT, which is way too much if you ask me,” Pluto went on, “the fucking visuals man. I was thrown into this tunnel. There were humans everywhere dressed up like clowns or something and they were congratulating me for being there – it’s not a drug, man, it’s a technology”.

“Next thing I know, I was in this mother fucking crystal dome talking to some weird looking chick with a golden hat and she was giving me geometric objects with symbols on them. She said they were pockets of information and to take them back with me… so I did”.

Sparking up the blunt, Pluto burned his facial hair with the lighter, filling the room with burnt gorilla hair smell, now masking the stale stench of lingering piss.

“Anyway, when I came round after my trip, I was just lying there, still seeing weird organic shapes and designs. But then, but then I heard it; my own gorilla voice talking back at me. That’s when I freaked out and wrecked the facility room.

“Wow,” I said, trying to wipe the image of Pluto losing it from my anxious mind, “but you’re alright with the voice now?”

“Ah fuck man, I don’t know what the hell to do with myself. Ten weeks ago I was sniffing my own shit, throwing it at people. Today I’m two weeks from starting my first job in IT and getting my own place”.

“And you’re getting paid?” I quizzed.

“Paid?” he responded, seemingly unaware of the term.

At this point Dr. Fisher entered the room quite abruptly.

“Well, that’s all the time there is now, guys,” he said nervously, “Pluto must be very tired now from all the talking”.

The now bewildered gorilla kept repeating the word ‘paid’ to himself as we were ushered out of the room.

Dr. Fisher later told us that although the clinical trial was a success, funding was a huge issue and that he had no other choice but to train Pluto in information technology and find him a job managing the IT team in a local call-centre that sells home insurance.

“Look, I’ll probably tell him about the whole working for money thing down the line, but right now, let’s not ruin Pluto’s moment,” he said, now slipping us a hundred dollar bill each, before saying goodbye.

On my way home, I couldn’t help but agree with the doctor. Why should we ruin his buzz? Why should tell him the fact that intelligent beings have somehow got themselves trapped into a routine of getting up early everyday, travelling long distances to work, and having to obey orders from people that they don’t really know or like. How can you even explain the fact that conscious animals capable of doing amazing things, are reduced to worshipping numbered pieces of paper that end up controlling every aspect of their whole entire existence, wasting it indefinetly? No amount of DMT could ever prepare him for that horrible trip. Maybe 15 years in “educational institutions” could, but not DMT.