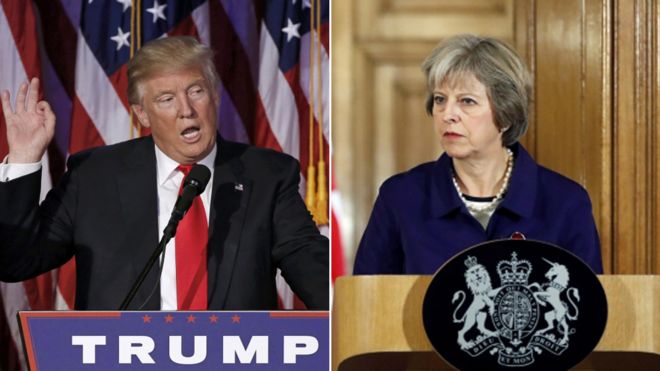 THE TOPICS for the eagerly awaited meeting between British Prime Minister Theresa May and US President Donald Trump later today have been revealed to the media.

Issues of trade, ‘the special relationship’, immigration and Brexit had been expected to form the bulk of subjects up for discussion between the two leaders, however it has now become clear discussions will be limited to whatever random thought that flits into the brain of President Trump.

“Traditionally, these meetings are structured affairs as world leaders rarely get one-on-one time, however, in this case I believe May will be forced to talk about inauguration crowd size and why America has no white gardeners anymore,” an aid of the PM shared with WWN.

Trade could very well form some portion of the conversation, given its importance to both nations, yet confidence among May’s travelling party of such an outcome is low.

“He’s going to bang on about how the world has gone to shit, then break to discuss my tits for an hour, isn’t he? I’ve been knee deep in studying papers on complex international trade deals and he’s going to tell me how Nigel Farage should be made King, the orange twat,” May confirmed to British press covering the meeting.

May’s downcast tone was surprising given the fact she was the first world leader invited to hold a meeting with the new US leader.

“Trump’s formal invite was a 15,000 word essay about crowd sizes, technically he didn’t invite us along at all, we’re sort of just chancing our arm actually,” May admitted.

The prime minister then failed to confirm that owing to Britain’s precarious post-Brexit fortunes she has been practising her grovelling technique along with learning off a series of compliments relating to big hands and lovely hair to shower Trump with.