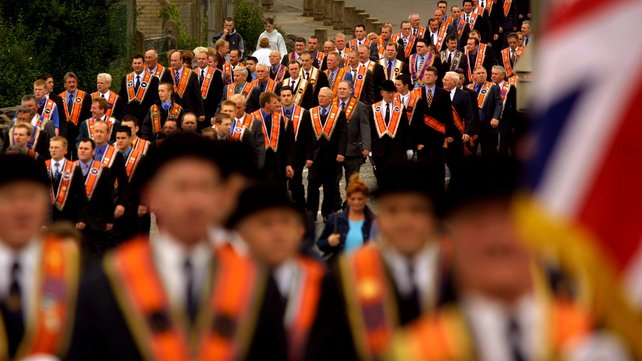 WITH July twelfth officially upon us, we look back now at the very little known history of the Orange Order parades, and how they originally came about.

The Loyal Orange Institution, more commonly known as the Orange Order, is a Protestant organisation based primarily in Northern Ireland. The Order was founded in 1795 in a bid to bring some sort of order to the way fruit was being displayed in many fruit stalls across the six counties.

The problem was that the poorer Catholic street traders would throw every different variety of fruit into the same stall, with no separation between items, making it difficult for buyers to search through. Not only was the jumbled up fruit unsightly, it also encouraged mould and rot to fester quite quickly, ruining the produce.

The Protestants, or “protesting ants” as they were originally called, began feuding with the Catholics about their idiotic shelving, insisting the fruit to be separated.

On July 12th, 1803, the Orange Order decided to finally take a stand, organising a march right through the heart of Belfast city on the Shankhill Road, where dozens of Catholic fruit sellers were based. Historians state that over 300 Orange Order members marched down through the stalls, carefully separating apples from pears, bananas from oranges, and even aligning the fruit in order of ripeness. This upset the Catholics and violence soon broke out on the street, and several people on both sides were tragically killed.

Every year thereafter, the Orange Order insisted on repeating the OCD based march in defiance of the Catholics stance on fruit, with more and more people dying annually.

It wasn’t until the Good Friday Agreement in 1998 did Catholics finally begin sorting out their fruit stalls, and peace treaty was finally reached.

Keeping with tradition, the Orange Order continues to march every year on the 12th of July to commemorate two centuries of fruit disorganisation. Even today, large pallets of fruits are still ritually burned, hopefully along with the disagreements between the two factions.