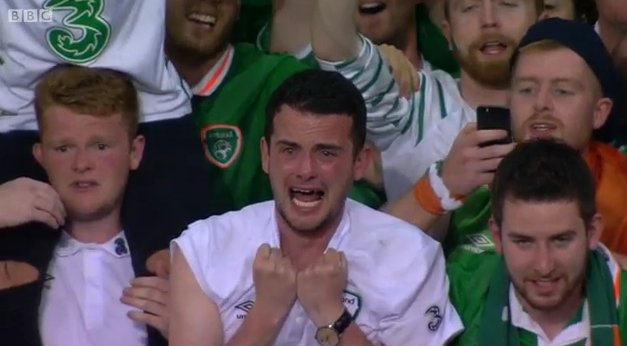 WWN is here to bring you all the latest from GET FUCKING IN YOU BEAUTY, THAT’S FOR ITALIA 90 YIZ PAVAROTTI LOVING PRICKS!

Sensing the historical importance of the Ireland v Italy game, UEFA cancelled the three other games scheduled to take place yesterday as they were utterly meaningless, paving the way for football fans to concentrate on what turned out to be the greatest footballing performance ever witnessed by shamrock-tinted glasses.

WWN can confirm reports that the Nation’s parents have all placed Robbie Brady’s goal above the birth of their first born in the ‘most treasured moments of my life’ category.

Fans have appealed to the government to immediately begin preparation for a large array of commemorative events to be scheduled across the country to mark the 24 hour anniversary of Robbie Brady’s goal later this evening. O’Connell St is set to be closed to all traffic to allow a concert to take place which will see Hozier, Rihanna, Paul McCartney, Adele and anyone else you want to see play yourself, playing. Michael D Higgins will lay a football-shaped wreath at the sight of Robbie Brady’s goal in France.

The game itself brought hope before kickoff as Antonio Conte’s side included as many as 8 changes, but pundits reminded fans that with names like Zaza, Immobile and Florenzi, the Italian had just as many silly sounding names in their starting lineup as great Italian teams of yesteryear.

Ireland, in a determined and committed performance, pushed for 90 exhausting minutes in the hot and humid conditions to beat the Italians, while the referee sadly was declared clinically blind by a tournament doctor after the match due to the fact he failed to give a penalty for a foul on James McClean.

McClean, Hendrick and Brady all stood out for the boys in green, with Shane Duffy also standing out as a decent lookalike for the Hound from Game of Thrones.

The euphoria felt in the seconds after Brady’s header was equivalent to 49 earth shattering orgasms. Nobody was more euphoric at the final whistle than Ireland’s assistant manager Roy Keane, who recorded the 6th smile of his life, his last smile coming when he punched a Rangers supporting kitten in the face.

UEFA have confirmed that they will investigate claims that Wes Hoolahan’s left foot was fitted with the latest GPS tracking software as there is no other explanation for how perfect his cross was for Robbie Brady’s goal.

In the aftermath of the match, it is believed as many as 40,000 Irish fans immediately got ill-advised tattoos with variations of the phrase ‘Robbie Brady, I Love You’, while the tears shed by Brady after he scored the decisive goal are currently on sale on eBay for €20,000 per tear.

RTÉ’s football pundits have come in for considerable praise after complaining about Martin O’Neill’s starting lineup selection as well as criticising the general concept of ‘joy’ only to completely change their tune once the final whistle had blown.

Scientists at MIT in America have conclusively proved that watching a Gif version of Michael D. Higgins dancing in the wake of Robbie Brady’s goal on repeat is the key to eternal happiness.

In other news RTÉ have confirmed plans to screen the much anticipated film ‘Hand of Frog 2: Ireland’s Revenge’ at 2pm this Sunday.