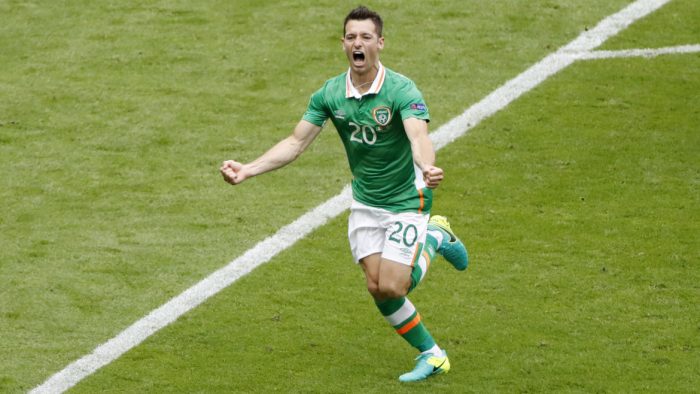 Welcome back to WWN’s round up of all the foot to ball to net action at Euro 2016.

An unsightly incident in Spain’s match against the Czech Republic saw several Czech players die of boredom as they faced off against the metronomic passing style of La Roja. A late Gerard Pique header rescued Spain’s blushes with a few minutes left on the clock, but the holders haven’t received much criticism for their performance as they are still by far the most handsome team in the tournament.

The big game of the day saw Ireland make their bow at the tournament as they faced off against Zlatan Ibrahimovic and 10 other lads whose names we’ve already forgotten.

All children conceived in the direct aftermath of Wes Hoolahan’s goal will have to be named Wes, as per article 21 of the Irish Constitution.

While an unfortunate Ciaran Clark own goal handed the Swedes a draw, John O’Shea was clocked doing minus 43 miles per hour as Zlatan Ibrahimovic coasted passed him in the box. It is believed John O’Shea remains the only thing on the planet slower than the wholesale separation of Church and State in Ireland.

Eamon Dunphy sensationally confirmed on air that he is willing to pay a group of ex-IRA mercenaries to kill James McCarthy in time for our next game against Belgium.

Dunphy also broke his previous record for the number of times he used the phrase ‘top quality players, players like John Giles’, managing to utter the phrase an astonishing 142 times. The pundit courted further controversy by demanding Wes Hoolahan allow him to have sex with the Norwich player live on air.

John Delaney has accepted Irish fans praise for the positive draw, confirming it was his idea to have Ireland not be completely shit at the European Championships. Delaney also appealed to UEFA to end the injustice against Ireland and to convert the one point gained for the draw into three points as ‘we deserved to win’. He also confirmed he would accept a hefty cheque instead of the points.

In the final game of the evening Italy dispatched an unconvincing Belgium team who Ireland will most likely beat the ever living shit out of on Saturday.