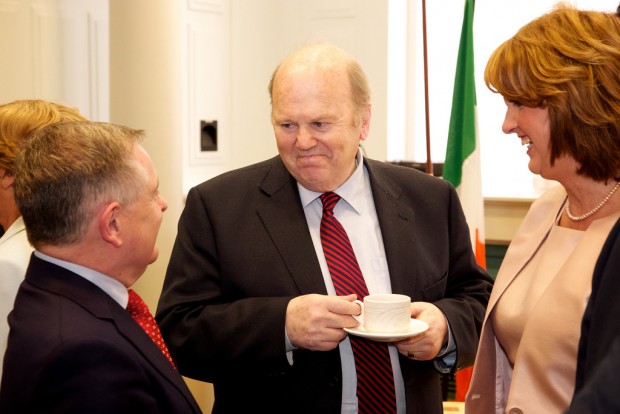 AS the Greek Government continues to assert their right to a fair deal for the Greek people Ireland’s leaders have reiterated that austerity, once fully embraced, isn’t actually all that bad.

“Honestly, once you really give it your best crack of the whip, there’s no better show in town,” Minister of Finance Michael Noonan explained in a media address earlier, citing the fact that Ireland has seen no adverse effects of sustained austerity measures and Greece should be fine as a result of austerity too.

Similarly, some members of the Irish public have urged the Greek people to ‘go away and cop on to yourselves’ as they themselves have been left largely untouched by austerity, ignoring the fact 220,000 children now live in everyday poverty in a nation of 4.5 million people.

“Ah, no that’s bollocks, sure I bought a new car at the start of the year,” conscientious citizen of Ireland Gary Hill said, contradicting the latest CSO figures on Irish poverty levels.

Despite the crippling poverty experienced by many, Minsiter Noonan was definitive in his support for austerity measures.

“Cutting a few things and then trying not to cut elsewhere doesn’t work lads,” added Minister Noonan, “you got to gut the lot. I’m not saying it’s painless, my hands are always wrecked from pressing minus on the calculator but it works 100% of the time, sure haven’t we got the Googles and the Facebooks down the docks there still”.

As the official best little country in the World, Ireland remains a testament to the good work of austerity with Tanaiste Joan Burton confirming the Nation ‘is a shining beacon of hope to anyone who wishes to punish the poorest of society the most’.

“Critics of austerity obviously haven’t talked to those 220,000 kids here, have they? Sure in my day the poor lads in class would have to walk miles for a decent latte, the country has moved on so much since then,” Minister for Public Expenditure Brendan Howling explained to WWN.

In other news, supermarkets in Ireland have appealed to the public to resist panic buying Greek salad supplies as well as feta cheese as ‘there’s no fear of running out of supplies’ any time soon.