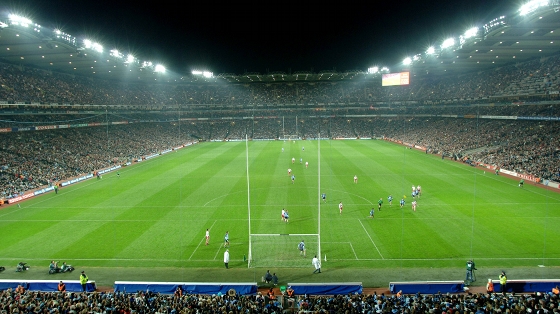 THE GAA are today celebrating yet another World Championship win as Ireland romped home against the Democratic Republic of Congo, beating out their opponents by 64 points.

“I don’t think the lads knew they were here to play football at all to be honest,” suggested Ireland captain Michael Murphy.

The margin of victory was far greater than last year’s final which saw Ireland edge out Poland by just 2 points in what many believe was the most ill-tempered GAA World Championship Final in history.

“We’re proud of the boys who really don’t get enough credit or publicity because it is played so close to the Football league final,” shared Ireland manager Mick O’Dwyer.

Footage from last year’s final against Poland is used in Garda training as example of vicious assaults as the game resulted in a total of 12 sendings off.

“The Polish lads came for a fight and they got it, but look, we’re here to celebrate a grand victory against the Congo boys. That Junior Yohan Bemba is some player,” added O’Dwyer.

The issue of giving the games more exposure was touched upon by GAA president Liam O’Neill. “I think there is fierce pressure that comes with playing for Ireland and we can all remember when we lost to the Nigerians in 1931, they were known as South Nigeria at the time – fabulous ball players. The Irish players were subjected to dog’s abuse,” explained O’Neill.

“We’re now trying to keep the World Championship under the radar as we don’t want a repeat of the public lashings the 1931 team got after that loss.”

Such was the psychological effect of an Irish team losing at their national sport the GAA removed the match from any official records with O’Neill becoming the first sitting president to admit the game took place at all.

The victory against the Congo represents a 73rd World Championship victory in a row for Ireland meaning they just edge out Nigeria as the most successful GAA country in the world. Nigeria’s 1 title is dwarfed by Ireland’s 112.

Ireland success in football sits in stark contrast to their Hurling counterparts who has not won an international title since the 80s. Ireland’s lastest Hurling loss saw manager Davy Fitzgerald face fresh criticism.

“Have you ever faced down a China man who has a hurl in their hand, have ye? No? Well, don’t even think about criticising the boys. Those Beijing lads are fecking artistes with sliotar and don’t get me started on the Peruvians,” an emotional Fitzgerald barked at our correspondent.