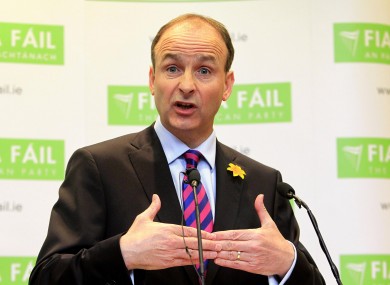 A new report published by political think tank Voterus claims that you probably haven’t noticed it yet but the Nation’s most reviled party Fianna Fáil are slowly crawling their way back into your thoughts.

Following the maelstrom of criticism leveled at Fianna Fáil for their hefty contribution to Ireland’s economic and societal woes the Micheál Martin led party have been busying themselves by sitting back and watching the Fine Gael-Labour coalition exhaust the public’s patience, Voterus claims.

“We have seen it countless times in the past,” admitted author of the report Richard Clarke, “voters run out of options for viable candidates and suddenly their hand motions to tick a box beside a gormless face belonging to Fianna Fáil candidate.”

Coupled with shocking revelations this week that rival opposition party Sinn Féin have apparent links with a terrorist group known as the IRA, Fianna Fáil are in a position whereby they have slyly made their way back into the public’s subconsciousness.

WWN understands Fianna Fáil have begun to implement a plan which will see their party members holding the door open for members of the public, posing as lollipop men and women as well as simply hanging out in public places hoping to register in someone’s subconscious.

Members of the public have reacted angrily to this news. “So are you telling me when I was 5 cents short of bus fare the other day, the bloke who gave me change could have been from Fianna Fáil? That’s fucking scary man,” shared Dubliner Jake Reilly.

“No, no, I don’t believe you. That’s not, they can’t have… But they’re a shower of bastards,” added Sarah Wilkins, mother-of-two and wife of Fianna Fáil local elections candidate Dave Wilkins.

It may have presented itself in the form of a news headline which doesn’t refer to the previous government as heartless scoundrels, a TV interview in which Bertie Ahern is allowed to think he is just marvellous or even an episode of Reeling in the Years containing footage of children who still had the capacity to smile.

No political clairvoyant could have predicted that the current government, fallible and human just like the rest of us, would fail to impress some sections of the politically sagacious public. Fianna Fáil are hoping to capitalise on this discontent, silently sneaking back into people’s train of thought.

Mr. Clarke, head of Voterus and author of the report issued some helpful advice for voters.

“Legally speaking, there is little we can do about this. So be afraid. Be very afraid. I might even suggest some shade of petrified would be best, you have no choice. Fianna Fáil will be lurking in your dreams tonight”.