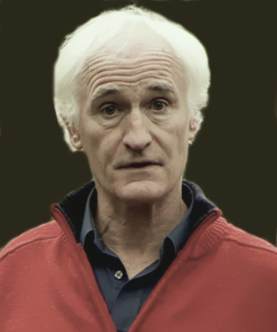 ENVIRONMENTALIST, activist and TV presenter Duncan Stewart exclusively open up to the Waterford Whispers News this week about his personal heating habits, revealing he is not quite the squeaky clean tree-hugger he is made out to be in the media.

I met Duncan on his wind farm in Tipperary where he was attending to a broken propeller.

“Is this whole farm self sufficient?” I asked inquisitively.

“Let’s put it this way; I haven’t paid an energy bill in fifteen years.” he gloated while gently stroking his turbine. “I live off the land and hunt my own meat. It’s a hard life, but rewarding all the same.”

We made our way to his geothermal home shortly after sundown. It was starting to freeze so he first covered his vegetable patch with a special material to prevent ‘bite’.

“Sweet dreams little ones.” he whispered under his breath, before embarrassingly realising I was there. “Excuse me, I’m not used to company. Not many come to visit.”

The house was what you’d expect from Duncan – simple, yet homely. He called me earlier that week to ‘confess something’ he said. The anticipation was killing me.

“You said on the phone that you had something to confess?” I asked.

He didn’t answer, but was instead inviting me into an adjoining room by extending his creepy index finger back and forth.

Inside was glowing, warm and cosy. A large fire was burning. I looked around in bewilderment, before looking back to see tears streaming down his horrible pasty face.

“Why are you crying Duncan?”

He was inconsolable at this stage, pointing at the fire. I still had no idea, so I picked him up from his knees and slapped his face, hard.

“God damn it Duncan, get a hold of yourself man!” I shouted, before hitting him several more times with a combination of punches and elbows.

Then, I realised his pain, and slapped him some more for good measure.

“Is that it?” I asked – pissed that I had traveled 110 kilometers to get there. “You rang me for this shit?”

“I have been burning fossil fuels for about three years now. I just couldn’t handle the guilt anymore. I had to tell someone!”

With that, I grabbed him by the shoulders and headbutted him square in the face, bursting his nose open like a plum. He fell unconscious splitting his head off an electric ionizer. I stomped him with my carbon footprint, then immediately searched his pockets for cash, finding only 234 euro. That will cover my petrol costs – I thought.

In hindsight, I should have taken his phone as well, but I’m not that type of person.

The following day, Duncan me called again to apologise. I only accepted on the basis of his financial donation. His hypocritical stance on coal fires angered me. He sensed my disgust and begged me not to write this piece, but I told him that it would go against my journalistic code. Duncan understood.

It seems we are all susceptible to hypocrisy, even Duncan Stewart. And I suppose, we can all learn from this incident. Human nature is like that.