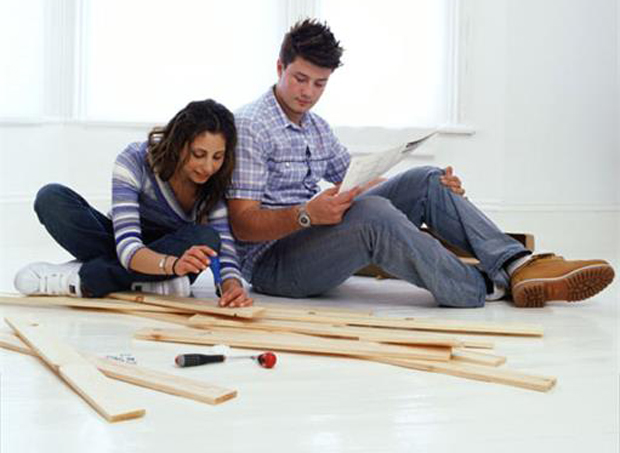 WWN can exclusively reveal a Dublin couple spent the majority of this morning, standing over a pile of wood, screws, hinges, fiddley bits and yokey-ma-bobs.

Clare Sullivan and her boyfriend of two years Michael Delaney took the day off from their respective jobs in order to move into their new apartment in the Dublin suburb of Rathmines and furnish their new abode with products from Sweden’s most stylish and affordable furniture outlet, Ikea.

The initial construction of a bed and several storage units started with much enthusiasm and an easy-going air but soon descended into scenes that would trouble even the most experienced of psychologists.

Some two hours into the endeavour Michael had taken to shouting at numerous inanimate objects and issuing expletive laden threats which will not republished by this publication.

“Ikea – ‘sure it’s easy’ she said,” Michael explained to WWN, “I honestly can’t remember a time when I didn’t have a screwdriver in my hand. When does it stop? Make it stop,” continued the visibly disturbed Michael.

Meanwhile Clare was to be found in the corner trying to place her clothes into a pile of wood that most definitely didn’t resemble a chest of drawers.

“Now, all finished,” Clare kept repeating to herself as she rocked back and forth before lying down on a mattress next to more wood thought to be the components of a four poster bed.

“We see this a lot,” admitted a spokesperson for Ikea when speaking to WWN this afternoon, “we deny all allegations that we make our products hard to assemble in an effort to split couples up thus creating the need for an individual to move out and purchase more furniture for their new home.”

When WWN reminded the spokesperson that Ikea did not stand accused of such elaborate and villainous tactics he fled out the nearest window and into the cold Dublin evening.