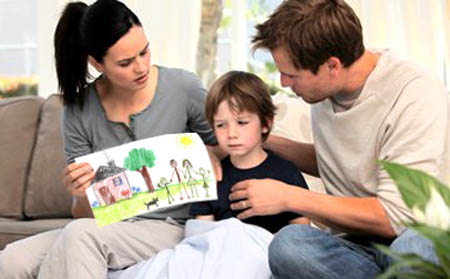 PARENTS OF 4-year-old Matthew Casey was said to be ‘not all that impressed’ with their son’s latest piece of artwork, but still felt obliged to pin it to the fridge anyway.

The toddler, who spent just over an hour drawing and colouring in a picture of his family, was met with stern looks and disappointment upon finishing his A4 piece.

“It was a poor effort in fairness,” said the child’s mother, Jackie Casey. “His representation of me and John (her husband) was absolutely disastrous. The proportions were all wrong and he made us out to be some kind of large headed slobs with skinny bodies.”

“Don’t get me started on the stupid looking house he drew. Jesus!”

Matthew’s devastated father tried his best to hold back the tears when recalling the moment his son showed him the paper page.

“I didn’t know where to look,” he told WWN. “He was expecting some kind of positive feedback, but I just couldn’t give it to him. It was an awful moment I just want to forget.”

Realising their son may not be the ‘creative genius’ they had hoped him to be, they decided it would be best to stick the ‘crappy picture’ to the fridge, regardless.

“We’ll just take it down if we have visitors,” said Jackie, who is now contemplating having another child as their first one turned out to be a dud. “Hopefully he’ll be a hard worker when he grows up.

“Otherwise, he hasn’t a fucking hope at this rate.”