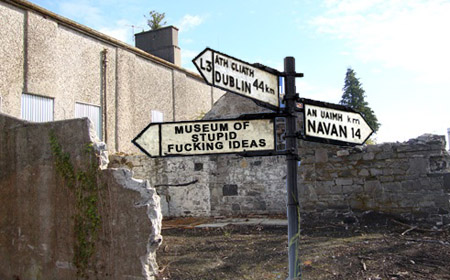 AN ON-LINE campaign sparked by outrage at the news that Mullingar is set to open a Niall Horan museum has resulted in the funding of another museum next door.

A kickstarter campaign proposing a ‘museum of stupid fucking ideas’ raised €1 million in under 12 seconds after news of a museum dedicated to the One Direction member spread across Ireland.

While details are scarce at this stage it is believed the museum of stupid fucking things will occupy the site directly beside the Niall Horan museum.

Architect plans seen by WWN reveal that the shape of the museum will essentially be a giant sign pointed directly at the Niall Horan museum.

It is unclear as to the motives of the people behind the kickstarter campaign but is widely speculated they thought it laughable that a museum would be dedicated to a young man who is participating in a derivative marketing campaign.

Richard Darabont, a leading museum curator, was approached by the Kickstarter organisers to head up the museum spoke exclusively to WWN.

“I imagine the museum’s content would be things like everything they put in the Niall Horan museum along with other things. Things such as a boy putting his head between railings, the decision to buy one last pint at 3.30am, not studying for the Leaving Cert and getting a 100% mortgage.”

This latest news comes a day after the other 25 counties in the Republic of Ireland formally wrote to Westmeath demanding it sever its ties from the nation and move elsewhere, preferably to just above Iceland so it is nicely out of view.