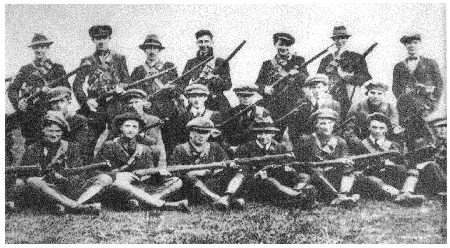 A MASSIVE ninety eight percent of intoxicated Irish males claim to have had a grandfather who was a member of the old IRA, a new study has found this week.

Out of 1,000 drunken males asked in the study, which was carried out by WWN in Waterford last week, a whopping 987 swore that their grandfather fought the war of independence.

The subjects, aged between 25-45 years of age, were given five pints of Guinness before answering a questionnaire about their families connection to the old IRA.

Many of the men also claimed they knew someone who is currently in the new IRA, and that if you ever need a hand with sorting out a few lads, don’t hesitate to call them.

One participant wrote in an answer column: ‘I probably shouldn’t be telling ye this, but my cousin is well connected in the RA and there’s an umbrella over my families heads. If you know what I mean? ;-)’

When showed a picture of a local band of the Waterford IRA , all 987 men laid claim to their grandfather being in the photo – while there was only 22 men in the shot.

Going on the release of the new figures, experts estimate that over four million Irish men fought against the British, leading many to believe that the old IRA wasn’t all that great at urban warfare.

“It just baffles me that Ireland actually lost the war of Independence,” said local historian Jason Jacob. “With that kind of army, they should have  successfully invaded Britain and taken it for their own!”

In response to the historians claims, unemployed builder Martin Griffin pointed out that not all the old IRB members carried guns or where foot soldiers, admitting that his own grandfather was too young to fight at the time, but did make Michael Collins tea a few times.

“It wasn’t all glitz and guns you know,” barked Griffin. “Those were complicated times back then and men didn’t have Playstations to practice on.”

“My dad has my grandfathers old IRA tea-medals in the attic if you want me to prove it.” he added.