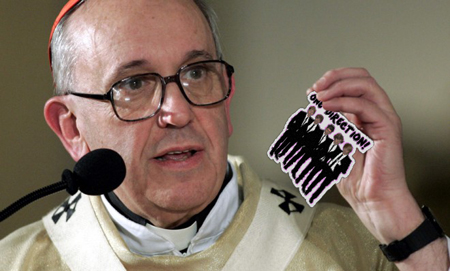 THE NEWLY appointed Pope, Francis the first, said he has been finding stickers from boy-band ‘One Direction’ everywhere in his Vatican quarters all morning.

The pontiff, who moved in late last night, found small pictures of band-members littered around the living area and said he is finding it very difficult to remove them from the bathroom mirror and fridge as they keep ‘leaving a mark behind them’.

Sources confirmed the previous pope was a big fan of the boy-band and insisted that cardinals and heads-of-state bring some kind of One Direction merchandise with them when visiting.

“He mostly requested Harry Styles memorabilia ” said one Vatican insider. “The first thing he packed when he moved out last month was a life-size cut out of Harry, which he kept in his bedroom beside the bed.”

Pope Francis was said to have spent the majority of the morning scraping one direction and Justin Bieber stickers off the bathroom mirror with a knife and a bucket of hot water.

Later he also reported finding a large selection of  what he described as ‘boy- scout magazines’ under the bed.

Insiders say the new pope is finding the move ‘quite stressful’, but expect him to settle in to his new quarters very soon.

“Benedict left the place in an awful state when he left.” said Cardinal Mario De Rossi, chief spokesperson for the pope. “Its just not nice finding crusty socks down the side of the chairs and boy band stickers everywhere.”