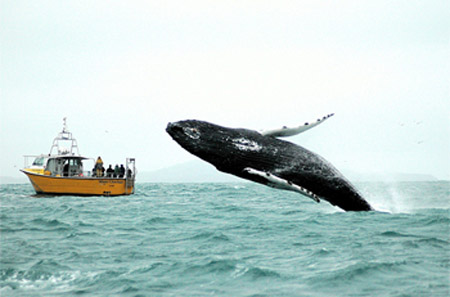 THE IRISH Marine Institute has confirmed today that humpback whales off the islands south coast are ‘just showing off now’.

Hundreds of photographers from around the world have flocked to the area in order to capture the mammals breaching.

Locals claim that at least five humpback whales have made the south-west Irish coast their home over the past few weeks.

Sightings of the humpbacks showing off have unimpressed Irish marine researchers, who have advised people to just ignore the 30-tonne-giants.

“They’re just big show offs.” said professor Martin Brophy, who is chief researcher at the Irish Marine Institue. “These whales think they’re great because they can jump out of the sea like that. It’s no big deal like. All fish can do that.”

Prof Brophy urged people to ignore the beasts as they were ‘only looking for attention’.

Micky Kielly, from Baltimore, Co Cork was walking his wife at the time when he spotted the humpbacks breaching in the sea.

“I knew there was something up when the missus cocked her ears back and started tugging at her lead. I looked over and seen a whale jumping out of the water like a big fucking faggot.”

The 47-year-old immediately started booing and throwing rocks in the whales general direction.

“They were too far out. I couldn’t reach them.

If this was Japan they wouldn’t be showing off like that.” he added.

Researchers expect the mammals to remain off the Cork coast until people get sick of them.