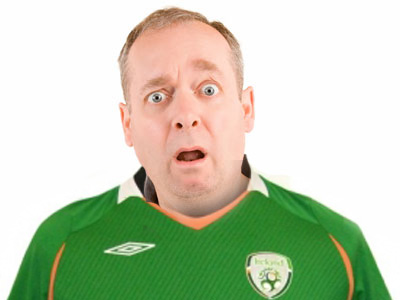 IRISH football supporter, Patrick Kent, was left shocked today when he realised the qualifying teams in next years Euro 2012 championships are ‘way better than us’

The electrician told WWN that he did not expect Ireland to be drawn with such top class teams like Spain and Italy.

“I was hoping we’d get drawn into an easy group. But then I realised: ‘there is no easy group!'”

“Who’d have thought there would be so many good teams in the finals?”

Mr. Kent said he will be flying to Poland for the championships next summer but doesn’t expect to be staying long.

“Ah sure, at least we qualified. It’ll be a good auld piss up if nothing else.”

“Hopefully we don’t get totally thrashed……..on the pitch like.”

Football experts say the reason why the 2012 qualifying teams are so good is because they keep scoring goals and winning games.

Veteran of the game, Eamon Dunphy, has urged supporters to give it their best and not get too disheartened about drawing two of the best teams in the championship.

“If  the Irish supporters don’t get behind the team then we’re fucked. Its as simple as that.”

Roy Keane has advised Irish fans, hoping to stay more than a week, to bring an England jersey.