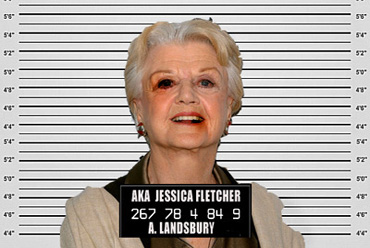 A SUSPECTED serial killer who went by the name of ‘Jessica Fletcher’ has been arrested at her home in south east Cork today after an anonymous phone-call to Gardai.

Angela Lansbury, 81, was arrested in a farmhouse-style retreat after gardai received a tip-off about her whereabouts.

Lansbury had become the subject of a major woman-hunt after a spate of murders in Cabot Cove, Maine, USA, in the late 80’s / early 90’s.

Gardai had set up an emergency response centre after realising the serial killer was  hiding in Ireland and celebrated when news broke that she had been picked up.

US Detectives had originally been looking to question the best-selling author of mystery novels after new DNA evidence linked her to an astounding 265 killings over a 12 year period.

Police said Landsbury liaised regularly with local police officers at the time to help solve the unusually high rate of murders in the vicinity.

Sheriff Mort Metzger of Cabit Cove said in a statement today: “We had no idea she was involved in the murders. Jessica would always try to help us. Little did we know she was the one manipulating the investigations by carefully placing clues and confusing suspects with astute questions about their whereabouts.

“We later found out she framed over 300 people for the murders. Some of whom died in jail, innocent!”

Landsbury fled the United States in 1997 without a trace and has been on the FBI’s most wanted list since then.

Cork Gardai were contacted on Sunday evening about her whereabouts by an anonymous caller. The FBI and Interpol were also contacted immediately, and after a 2 hour stand off with Gardai she was finally arrested this morning at 9am.

Chief Supt Intd Ger Healy said at a press conference today: “We deployed the special response unit at 6:30am. Ms. Landsbury was asleep in an upstairs bedroom when we surrounded the premises.

“We believe she woke up when we busted down the front door. She then made a run for the back door and managed to assault and disarm three Gardai who were guarding the exit. Ms. Landsbury then grabbed a gun from one of the unconscious Gardai. She then ran to a garden shed and locked herself in.

“After a 2 hour stand off we finally convinced her to give herself up.

“I have to thank all 78 gardai and detectives involved in the operation.” added Healy.

Local Cork people with missing relatives have gathered outside the house today were Landsbury was arrested, some of them clutching photographs of their missing loved ones.

Gardai are now searching the east Cork home and a full excavation of the grounds will get underway this week.