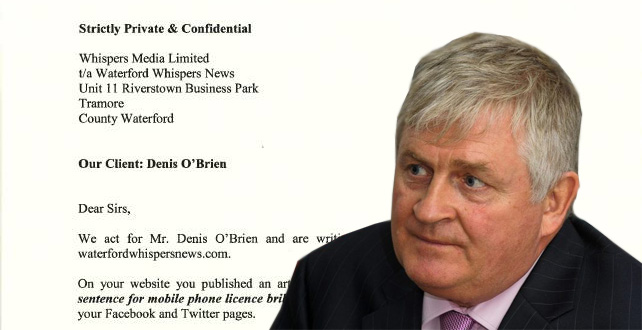 IT MAY be an impossible task but WWN feels it owes it to its readers to explain the Siteserv inquiry findings while at the same time trying not to get sued.

The commission’s report into the controversial Siteserv sale by Mr Justice Brian Cregan found that Denis O’Brien engaged in no wrongdoing. We’re just putting that upfront now for any of his trigger happy legal foxhounds, like Meaghers solicitors for instance, who sent us a letter 7 years ago.

The commission found the chairman of Siteserv sale sub-committee, Robert Dix, “gave false, misleading and untruthful evidence in sworn affidavits” and that Dix and O’Brien spent a weekend together in San Moritz in Switzerland during the sales process. Wow, that stinks; the Dix part. What a Dix, in fact. Again, not looking to get sued here, this is not a reflection on Mr O’Brien.

As part of a “below the surface” process that the IBRC was unaware of Harvey, the chief executive of Siteserv, met five of the six second round bidders during the second round of the sale process. All bidders and Harvey were aware these meetings were a “breach” of the second round sales process, including a 3-hour meeting with O’Brien-controlled Island Capital company.

All these bidders knowingly breaching the bidding process is… fine. We couldn’t survive a suing.

The Commission said “Mr Dix was aware that Mr McFadden was advising/assisting Mr O’Brien on his Siteserv bid and knew, or assumed, that Mr McFadden would benefit financially if Mr O’Brien’s bid were successful.” And we’re reproducing this segment without comment, because as we said Mr O’Brien ain’t done shit wrong.

Yes that’s the same Dix and McFadden that were on a skiing trip with Mr O’Brien in Switzerland during the bidding process, but we’re not touching that.

Harvey and his Siteserv co-founder Niall McFadden “orchestrated an elaborate charade of… offshore companies, fictitious agreements, false letters and false backdating of documents” in order to conceal the income and assets that they acquired as part of the transaction from their creditor IBRC at all times.

Just for any legal teams – read that sentence back, not a mention of Mr O’Brien.

According to the Commission the Harvey and McFadden did not disclose this income or these assets to Revenue nor did they pay any tax on the capital gain on the sale of the 500 shares in Siteserv Holdings for €2.3 million.

The Commission also said Mr McFadden’s Finder’s Fee, paid by O’Brien controlled company Millington, should also be examined. We’ve seen our bank balance, we’re not touching that one either.

“At this meeting they agreed that Mr Harvey and Mr McFadden could obtain up to 15 per cent shares in the new company, if Mr O’Brien’s bid were successful,” the report said. Yes, that’s the ‘fictitious agreements, false letters and false backdating of documents’ Harvey and McFadden, but we’ll be saying nothing, as last time we checked, Irish libel laws can launch you directly into the sun.

EDITOR’S NOTE: In a completely unrelated matter you can support Waterford Whispers News by joining our Patreon HERE. 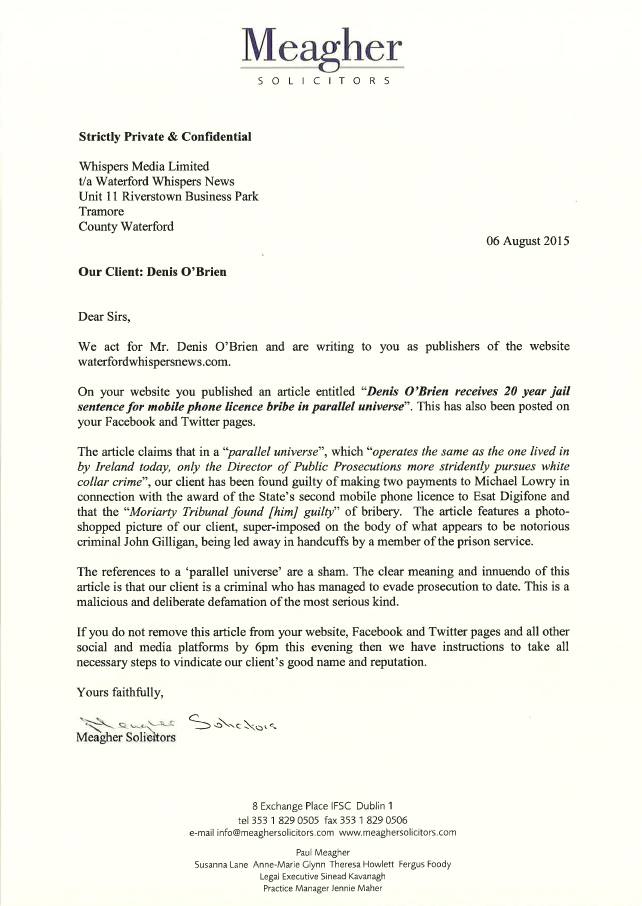