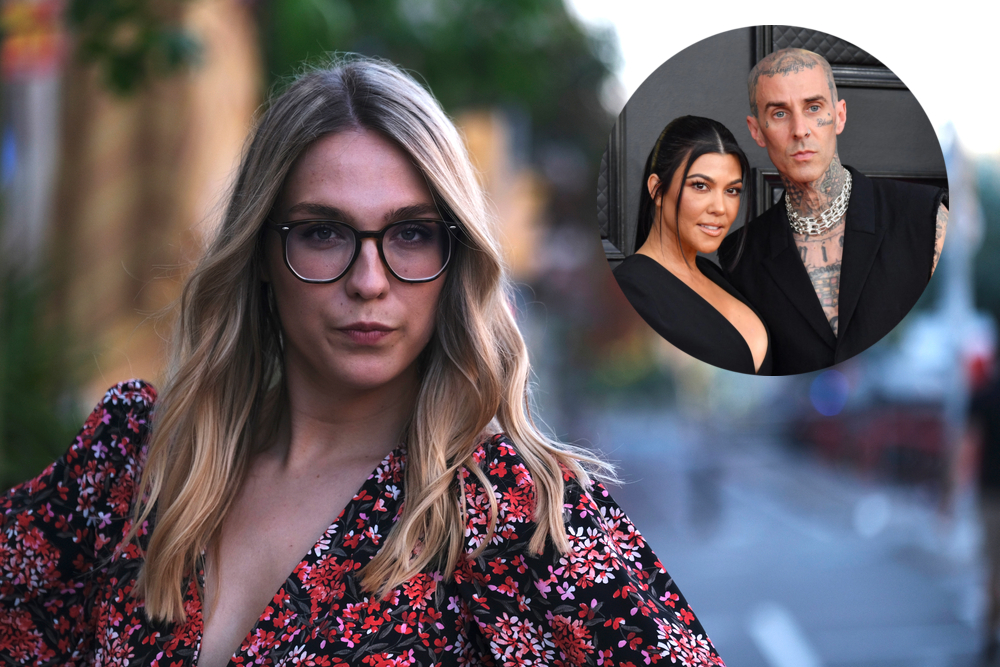 WWN’S ENTERTAINMENT correspondent Anne Trope was out enjoying her night post-Grammys reporting when, passing by the One Love Wedding Chapel in Las Vegas, she was sensationally asked by an Elvis impersonator to be an official witness to a wedding; that wedding turned out to be the nuptials of Kourtney Kardashian and Travis Barker.

Anne spills all below with an amazing world exclusive!

“It was wild, I couldn’t believe it, it was like a dream” Anne tells her colleagues now.

“Kourtney walked down the aisle to The Simpsons theme tune, and their wedding rings were made out of bone fragments Travis got a doctor to take from both their ribs”.

“Travis crawled down in the aisle in a crab pose to a reworked version of All The Small Things called ‘All The BIG Things’. The Dalai Lama was a ring bearer. I’ll be honest it was a lot to take in, I was just out with my girl crew looking to score some coke”.

“As per Travis’s famously out there and edgy persona he didn’t even wear a suit, he’s so random – his bad boy unconventional ways just never end.”

“Kourtney’s dress was hand stitched and made out entirely out of Travis’s old Vans trainers, so you get the impression this was being planned for a long time.”

“Travis is clearly a romantic guy he wrote his vows on his drum kit, so they were very loud and wordless. Kourtney read hers from a menu, so it was mainly just the food served at Victory Burger & Wings Co.”

“The wedding was nearly stopped when security removed Kris who was trying to break it up because there were no cameras filling the ceremony. I couldn’t make out what she was saying because security put a bag over her head before sending her to a CIA black site to cool off but it sounded like she said ‘at least film the wedding night, we can get the Kim deal’.”

“Faith is super important to Travis so there were several readings from the book of Judge Judy, specifically her book ‘Don’t Pee On My Leg And Tell Me It’s Raining'”.

“And I don’t mean to complain, and I was only a guest by chance but the prosecco wasn’t nice. Would it have killed them to use champagne? And again, not complaining but they could have made it optional for witnesses to get a full back tattoo of the happy couple”.