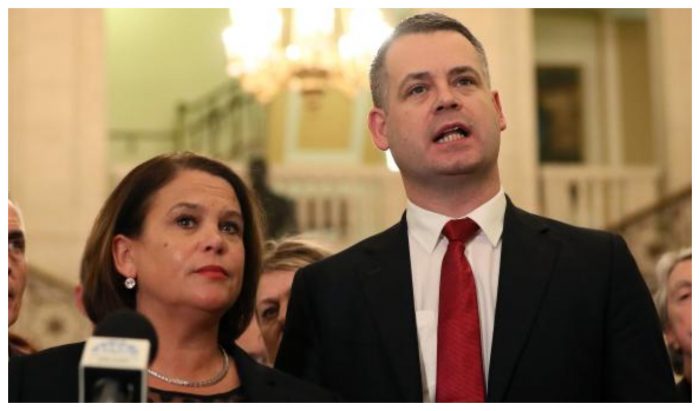 DESPITE his party’s misgivings and backward leaning ideologies, DUP leader Jeffrey Donaldson’s latest accusation that Sinn Féin are “pushing a radical all-Ireland agenda” may actually have some truth in it, WWN has learned.

“As bad as they are, the DUP might be on to something here,” an anonymous source close to Sinn Féin exclusively revealed, “some of us are very shocked to hear these accusations so we did some digging and what we found was astounding”.

Showing this reporter a series of social media posts, advertising campaigns and soundbites from senior Sinn Féin officials, it was clear that there was some element of truth in one of Ireland’s Republican parties calling for unification of the island.

“Now I’m no expert, but this video clip would suggest some kind of anti-English bias and a desire for sovereignty in the North,” our source shows us a video of David Cullinane shouting ‘up the Ra’ at a Sinn Féin event.

Viewing further material, some of which posters clearly stating, ’32 county Republic’, ‘Tiocfaidh ár lá’, ‘Poll on a United Ireland Now’ along with hundreds of articles centred around prominent Sinn Féin figures calling for a border poll, it seemed the insightful DUP leader may be on to something huge.

“I don’t know what this will do to Sinn Féin if it ever gets out,” our source concluded, now hugging his teddy bear really tight and fiddling with his grey beard, “hopefully these serious accusations will fade away over time and Sinn Féin can go back to being an impartial party”.