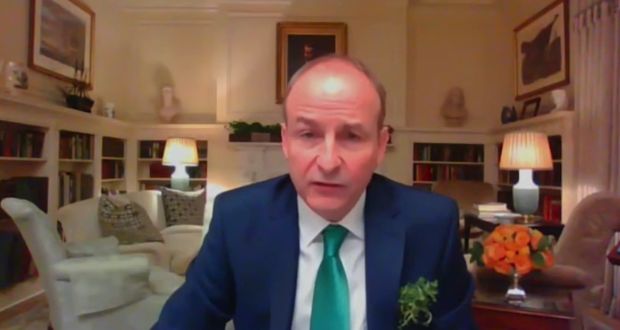 BAD LUCK has seen Covid-19 greatly curb Taoiseach Micheál Martin’s American visit, with the Fianna Fáil man holed up in Blair House opposite The White House until his Covid-1 symptoms clear up prompting an outpouring of sympathy.

However, questions are already being asked about the mammoth bill being racked up by Martin, who has taken up his hosts kind offer of ‘if you need anything just ask’ and in the process blown through $1mn of room services charges.

Just what has he spent the taxpayer’s money on? WWN reveals all after getting exclusive access to the receipts:

Confined to his room and unable to cook for himself, Martin understandably ordered take away his first night in quarantine, opting for US fast food staple Chick-fil-A.

Clearly down about not being able to hand over a bowl of shamrock to Joe Biden in front of the world’s media, Martin took to his eating his emotions with a further 58 orders of Chick-fil-A, Shake Shack, Five Guys and Dominos as well as significant bulk purchases of Ben and Jerrys.

By day two Martin was no closer to excepting the sad reality and paid someone in the local DC area for a negative PCR test, however, the individual who took the 5-figure sum from Martin did a runner but not before posting a selfie of themselves bumping into President Biden out on a walk.

Upset at having earlier purchased two tickets to see Hamilton on Broadway, the Taoiseach purchased two ‘Premium Deluxe Diamond Package’ ticket which sees the cast of Hamilton bring the show to you. Martin ran up considerable expenses purchasing hazmat suits for all performers.

Sources close to the Taoiseach suggest he think Squid Game is overrated and that you’d only get Peacock because it has all of the US Office on it.

A number of items were couriered from the Taoiseach’s home in Cork to make quarantine in a foreign country feel a bit more cosy and familiar. Sent via the government jet at great expense items included the Taoiseach’s voodoo doll of Leo Varadkar, one chef from Hillbilly’s and his beloved dart board with 40 pictures of Mary Lou McDonald on it.