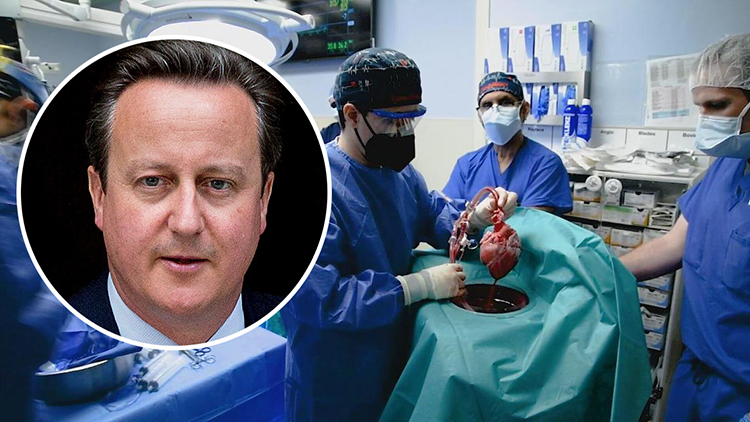 A US man who received the world’s first pig heart transplant has thanked former British Prime Minister David Cameron for his well wishes but urged him that there is no need for all the flowers.

Speaking from his recovery room at the University of Maryland Medical Centre, 57-year-old David Bennett said he was overwhelmed at the response he was getting from around the world, but slightly concerned with Mr. Cameron’s constant texting and well wishing.

“Like, what does ‘can you play dead’ even mean?” Mr. Bennett asked, reading out one of the many text messages from David Cameron, which was accompanied by what appears to be a picture of an infected skin tag, “he keeps sending me these weird images and asking if ‘I like?’, I’m sure it’s harmless enough”.

Mr. Bennett underwent the surgery after failing to secure a human heart and was on the verge of dying, before doctors decided to experiment with a pig to human organ transplant, but did not expect such interest from abroad, especially from a former head of state.

“I’d like to smother you in honey mustard glaze and stuff your hole with apples,” Bennett continued to read out Cameron’s well wishes before blocking his number and then thanking his doctors for saving his life, “thanks to the surgeons for saving me, hopefully my new heart doesn’t attract any more freaks”.

“Peppa… I mean Mr. Bennett – apologies, that’s our pet name for him – seems to be oinking well, sorry, doing well, and there doesn’t seem to be any rejection of the animal heart as of yet, which is great news for people currently waiting on a donor and my reputation,” said Dr Muhammad Mohiuddin, scientific director of the university’s animal-to-human transplant programme, before giving his patient his first post-op turnip meal.