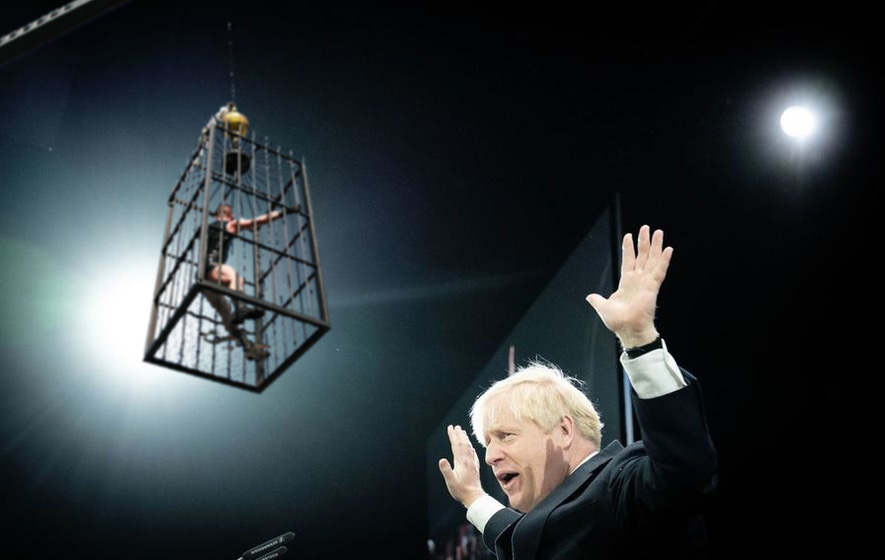 DESPITE failing to mention Northern Ireland at all during his 45 minute speech at the Tory Party conference, British PM Boris Johnson delighted his party faithful with a vacuous oration that was aided by the presence of a Universal Credit recipient suspended from the ceiling in a cage.

“What an odious little creature,” Johnson said not of himself but of the single mother contained in the cage who, like thousands of others, saw her UC slashed by £1,000 overnight while Tory members partied the night away in Manchester.

Removing their square shoes, and taking off their uncomfortable itching wigs, the Tory Party settled in for enthusiastically applauding the Grand High Twit as he spoke of triumphs such as labour, food and fuel shortages while blaming Labour for ten years of a Conservative government.

“That’s enough rattling of the cage and pleas for help from you thank you,” added Johnson as he asked zero contract hours minimum wage security guards to put a muzzle on the caged peasant who insisted on trying to make the conference aware of her suffering.

Other highlights of the Brittle Bitter Bullies conference included Dominic Raab not knowing what misogyny is, Health Secretary Sajid Javid suggesting people not bother the NHS and just ask their own family members for medical advice and leading businesses asking the PM if he was repeatedly dropped on his head as a child after hearing his speech.

“Never has someone taken so many words to say so little,” Johnson continued, prompting a standing ovation from the crowd, setting a world record for the largest ever gathering of sycophants in a single room.

“Whatever vast array of hardships await the Great British public, just remember my friends we’re going to profit from it,” concluded Johnson, before burying his head in a pie like a circus clown in a bid to ensure that’s the only the thing the media focused on.