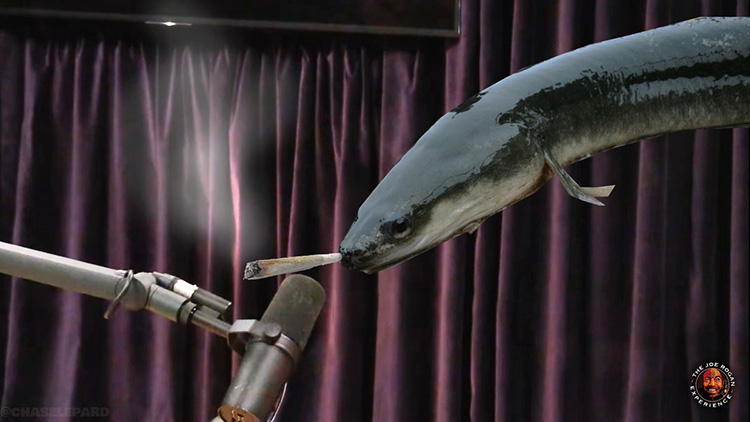 THE NEWS that high levels of drugs were found in the waters of the lakes, rivers and marshes surrounding the site of the iconic Glastonbury music festival has piqued the interest of world-famous podcaster Joe Rogan, who has announced that he would like a stoned-out-of-it British fish to join him for a Zoom interview.

Scientists announced this week that high levels of cocaine and MDMA-enriched urine from the 200,000 festival goers taking a slash in the hedges had entered the water system surrounding the gig, leading to a massive risk of contamination to the local wildlife, including a species of rare eel.

“But like, when they say ‘a threat to local wildlife’, they’re looking at it from a narrow point of view. To me, all I’ve experienced is enlightenment” said Rogan’s intended eel guest at 3AM at a house party even though nobody had mentioned drugs at all.

“That’s what I’m going to talk to Joe about. He’s a big fan of using mind-altering drugs to expand one’s consciousness, and I’m the perfect fish to talk to about that. I’ve been pickling in amphetamines for two years, you couldn’t believe the shit I’ve seen, man. Mind you, even I wouldn’t take a horse de-wormer to cure a respiratory illness, so that’s just one where me and Joe differ”.

UPDATE: In an unfortunate mix-up, the eel has been booked to appear on The Joe Duffy Show, where he will be drilled on the evils of drugs and being a bad influence on young fry.