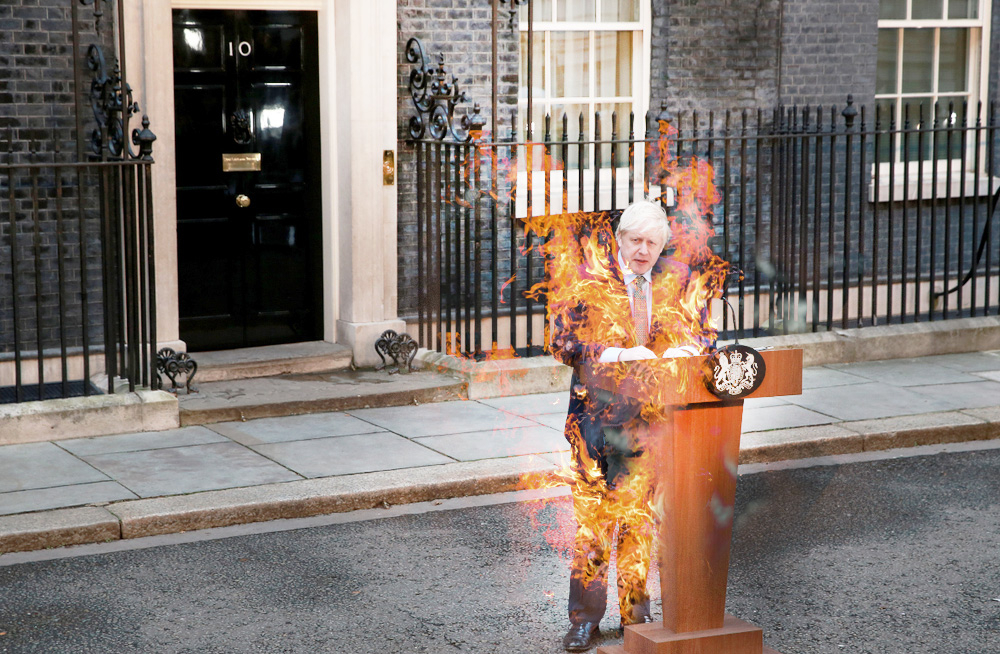 SPEAKING from outside a smoke-filled Number 10 this morning, British Prime Minister Boris Johnson has insisted that ‘everything is all under control’ while simultaneously patting out patches of fire on his person, WWN reports.

Frantically blowing off billowing smoke, Johnson rubbished any criticism that the U.K. is currently in a grip of a self-inflicted crisis brought on by poor governance, greed and general political incompetence.

“Seriously, we’re fine, don’t worry about us,” the grimacing PM told awaiting press, who began backing off from the intense flames now engulfing the 57-year-old mess, “these fuel, food and labour shortages that have been going on for months are just temporary and Britain will bounce back better than arghhhhh… ,” Johnson wailed in agony as he was totally consumed by fire, which investigators would later find to have started in his pants.

Johnson refused to reveal how he managed to get his hands on the petrol which was likely fueling the fire raging on him.

Despite similar shortages in popcorn across the rest of Europe, Ireland was warned not to enjoy the demise of the British empire too much as it too has its own embarrassing shortages coming.

“Please keep your mocking to a minimum as we enter a winter full of possible energy blackouts,” a spokesperson for the British Slagging Association in Ireland warned, referring to the temporary closure of the country’s 2 main power plants for maintenance.

Meanwhile, for the first time in its recent history, the UK has called on foreigners to go over there and take its jobs until a time it doesn’t need them again.